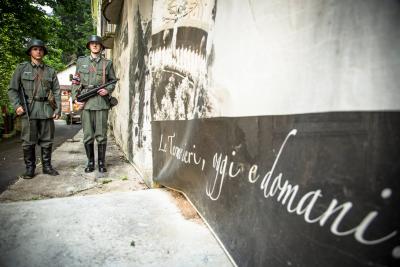 VICENZA - The President of Veneto, Luca Zaia, has been made to apologise after a post on his official Facebook page, promoting a historical reenactment set in a Nazi bunker with guides dressed in Wermacht uniforms, caused "bewilderment."

Zaia’s post on the social media website stated that the exhibition, located in Rocoaro Terme Spa in the province of Vicenza, was a kind of "recreation of history" and that he recommended people to visit it. Attached to the post were photos of Nazi soldiers.

The ANPI (National Partisan Association of Italy) in Veneto quickly expressed "bewilderment in reading the post published on the page of President Zaia concerning the opening of a museum space in one of the bunkers built by the Nazis at the Fonti di Recoaro Terme and that the guided tour is made by people in Wehrmacht period uniform.

"This choice was made precisely to coincide with the 8th of September”, the day the liberation struggle in Italy began. “There would be no objection if the redevelopment of the bunker was motivated by the purpose of in-depth analysis of the terrible war events that lasted in our region until the end of April 1945. However, the guided tour is conducted by people in Wehrmacht period uniforms, unbelievable to all those who condemn Nazism and Fascism and the Nazi occupation of Italy that has caused so much grief in our country”. During the last year of the Second World War, the spa complex was the headquarters of Field Marshal Albert Kesselring, supreme commander of the German forces in Italy

The controversy continued on social media to such an extent that President Zaia was forced to apologise on behalf of his communications team, who had published it as part of their role to promote cultural events in the region. “The Presidency apologizes, on behalf of the responsible structure, to all the parties who felt hurt in some way by this post, whose intent was certainly not to offend sensibilities and memories. In order to avoid further inconvenience, the order was given to delete the post".

Despite the online contention, the exhibition went ahead. Its press release states, "the redevelopment of the bunker allows the visitor to stop time for an innovative historical-cultural experience: the environments of the bunker are explored through multimedia viewers using virtual reality. The visit is accompanied by guides in period uniforms of the Wehrmacht. There is also a German access check point”.