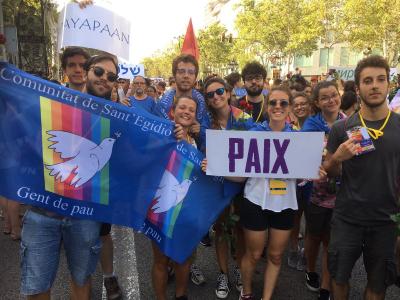 ROME - On Saturday, the 10th anniversary of the terrorist attack on the Two Towers, a flash mob organised by “Youth for Peace” - a branch of the Catholic international peace movement, Sant'Egidio - will assemble outside the Palazzo dei Congressi in Rome to remember the victims of war and terrorism around the world. The youth movement has coordinated similar gatherings to take place simultaneously across 70 cities in 16 European countries.

The event, entitled "Global Friendship - The Future We Want" and due to have over 2000 participants, is scheduled for 3 p.m. and will be live-streamed on the Sant’Egidio website in 12 languages. Its slogan: “Peace for All, No More Violence, No More Terrorism!”, summarises the objective to promote their movement’s values and highlight ongoing global issues such as the events in Afghanistan and social consequences of the pandemic.

In Rome, the flash mob will be attended by the president of the Community of Sant'Egidio,  Marco Impagliazzo, and the representative of the United States to the Holy See, Patrick Connell.

In addition, at 8 p.m. on Friday Sept. 10, the Community of Sant'Egidio will gather in prayer in the Basilica of Santa Maria in Trastevere to remember the victims of terrorism and all wars. The prayer vigil will be presided over by Monsignor Vincenzo Paglia, president of the Pontifical Academy for Life, along with other members of the diplomatic corps. It will also be live-streamed on the website www.santegidio.org.