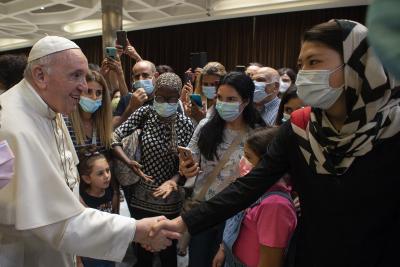 VATICAN CITY - In the Paul VI Hall, Pope Francis met with over 100 homeless people and refugees, around 20 of whom had recently arrived from Afghanistan. The group had been invited to watch a screening of the 2020 documentary film, 'Francesco', organised by the director, Evgeny Afineevsky, and the Laudato si Foundation. This was followed by the meeting with the pope himself.

The large group of displaced people who watched the film, which was shown in the New Synod Hall on Monday evening, included two families who had been recently evacuated from Kabul. Afineevsky addressed the crowd and spoke of his own migratory background, which began in Russia before he escaped to Israel and finally settled in the USA.

During the screening, there was “an atmosphere of strong emotion”, as those present had experienced the tragedies of war, poverty, persecution and environmental disasters. Afterwards, the pope announced that he wanted to personally welcome everyone into the atrium of the Paul VI Hall.

The atmosphere was “informal,” as Francis spoke to each person in turn. Matteo Bruni, the director of the Holy See Press Office, stated, “the pope addressed words of affection and comfort."

The two Afghan families consist of four brothers and sisters between the ages of 14 and 20. They are under the guardianship of an uncle, as their parents are trapped in a refugee camp in Iran. The eldest of the four, Bismillah, told the Vatican News how significant it was to feel welcomed, listened to and understood by Pope Francis, and how important his presence this evening was in instilling in them a new hope in facing the future. The four young people are now safe in Italy thanks to support from the Community of Sant'Egidio.

At the end of the evening, the pope returned to Casa Santa Marta while the organisers distributed food packages to each of the refugees and homeless individuals.