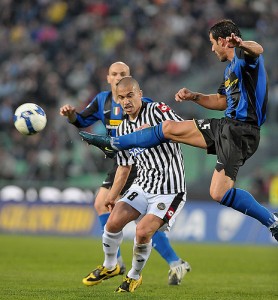 ROME – Leonardo Araújo’s impeccable start as Inter Milan manager finally came to an end last week with a 3-1 defeat to in-form Udinese. From the start of the match Inter looked shaky at the back. One particularly shambolic moment may serve as an example. As a wayward clearance from Maicon looped towards the goal, stand-in keeper Luca Castellazzi lost not only his bearings but the flight of the ball. The crossbar saved the goal but not the keeper’s blushes. Julio Cesar is expected to return soon. He will be welcomed back.

The goalkeeper’s shortcomings were forgotten for a moment when Dejan Stankovic bagged the opener with a typically powerful drive. It was quickly cancelled out, however, by Cristian Zapata’s equaliser, which evaded the hapless Castellazzi at his near post. Moments later, Antonio Di Natale, Serie A’s top scorer, gave Udinese the lead with a sumptuous free-kick. The final nail in the coffin of Leonardo’s perfect record was knocked in by Maurizio Domizzi, who gave the home side a 3-1 advantage in the 69th minute.

What is refreshing for Inter fans is that this defeat has nothing of the apocalyptic about it. That nightmarish November in which they drew with Brescia, drew with Lecce, lost to Milan and lost to Chievo is a difficult one to forget. Unsurprisingly, that month led to Rafael Benitez’s departure. “He couldn’t cope,” Massimo Moratti, the Inter chairman, bluntly, rightly said. But now the Nerazzurri once again have a manager they can believe in. “The defeat in Udine,” said Leonardo, “isn’t decisive for the Scudetto. We’re up there in the pack and that’s where we’ll stay.”

They can believe in that voice because it is a realistic one. Without ruling out the league title, Leonardo expresses the adjustment of expectation that must take place after a reign as disastrous as that of Rafael Benitez. Automatic Champions League qualification has become the aim. The Scudetto has become a hope. In that statement a fan can find realism, confidence, and optimism, all in the right measure. It signals a return to sound management. “We’re up there in the pack and that’s where we’ll stay.”

Before the defeat in Udine, Leonardo had taken all 12 points from their opening four matches. After an unhappy spell as manager of AC Milan last year it was always going to be important for him to start well, to ease the transition from one side of the city to the other, and to get his career back on track after a disappointing debut. He has certainly done that.

Thanks to a last-gasp win against Napoli in the quarter-finals of the Coppa Italia on Wednesday 26th January, Inter are still fighting on all the most important fronts: the league, the cup and, of course, the Champions League. While no one expects a clean sweep in the manner of the special one, Jose Mourinho, the victory over Napoli, which came in the form of a 5-4 penalty thriller, means that Leonardo still has the chance to get his hands on some silverware early in his career. They will meet Roma in the semi-finals. And with Palermo playing AC Milan in the other tie, the dream final of a Milan derby is still on the cards.

It would be sweet revenge indeed for Leonardo’s Inter Milan to beat AC Milan, the club he so recently left, in the final of the Coppa Italia. Even sweeter if he managed to knock them from their perch at the top of Serie A come the end of the season. The 9-point gap makes that unlikely but, with a game in hand and a manager with a point to prove, Inter Milan fans should not rule it out. 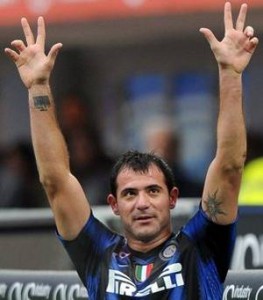