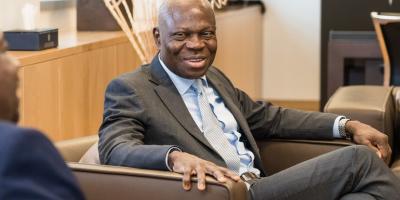 ROME -- In a move that has surprised the diplomatic community in Rome and UN staff, the International Fund for Agricultural Development (IFAD)  President Gilbert Houngbo has announced to staff that he is running for the post of Director General of the International Labour Organization; IFAD sources say. The announcement came a mere six months after the Togoloese former prime minister was re-elected to head Rome-based IFAD, a UN development bank for small farmers,  for a second term of four years.

The move has raised a number of questions, in particular on conflict of interest, diplomatic sources said. "Best practice and common in these situations, is that you step down from your current role while campaigning in another election," a veteran IFAD watcher said. "However,  Houngbo has announced that he will stay in the role as President of IFAD and 'only' campaign in his free time and on holidays."
"Few diplomatic observers believe that this is either realistic or correct vis-à-vis the IFAD member states and IFAD staff."
Ironically  Houngbo, a former ILO deputy director, forced IFAD out of its membership of the ILO Tribunal, despite fierce protests from IFAD staff.
The move significantly reduced staff rights and employment protection, including the opportunity to challenge IFAD in the court of the ILO Tribunal.
It also followed a massive 'Pol-Pot' style decentralisation of IFAD under Houngbo's reign under which hundreds of staffers were obliged to move to posts in the field from Rome headquarters at short notice or quit, disrupting the family lives of many staffers and leaving the vast IFAD headquarters a virtually-empty ghost building.
Should Houngbo succeed in the move to head the ILO it would raise the question of whether the next IFAD head would be another African under the UN spoils system that influences top appointments at UN specialised agencies such as the Rome food agencies.
Houngbo at IFAD succeeded Kanayo Nwanze of Nigeria who survived a scandal over his luxurious lifestyle in Rome living on a vast villa on the Appian Way deemed by many observers to be inconsistent with his poverty-busting role.
jf
U.N.
Embassy Row