How Do I Watch Star Trek In Chronological Order? 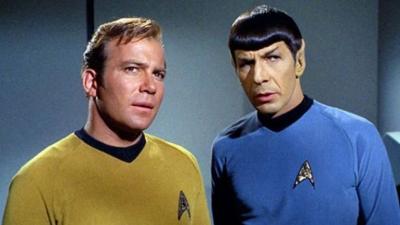 LOS ANGELES -- There's no denying that the Star Trek franchise has been a success over the last couple of years. And even though it debuted in 1966, the series was still a great hit to the point that it consistently grew its fanbase.

Yet, for newbies, the franchise may come off as confusing, especially if we're going to talk about watching the Star Trek movies in order.

To address this concern, we've created a simple and brief guide to help you enjoy the franchise to the fullest!

This is the prequel to the Original Series and is considered the earliest in the Star Trek timeline.

The story details the Earth's historical invention of warp five capable ships, namely the USS Enterprise NX-01, led by Captain Jonathan Archer. At its initial launch, Captain Archer directed the crew's journey deep into space, wherein they had the opportunity to get in contact with diverse alien staples—beginning the new age of discovery and exploration for the Earth.

This series introduced the character of Michael Burnham, who is the science specialist of the USS Discovery NCC-1031.

The first season's story follows Michael and his crew dealing with the galaxy on the brink of war. Meanwhile, in the second season, Michael and others had to chase after a mysterious entity called "The Red Angel."

This led the crew to embark on a one-way journey to the farthest distance to catch up with the creature.

The plot would start in the year 2265, not long after the five-year journey of USS Enterprise had taken place. Here, the story would focus on Captain Kirk and his First Officer Spock's adventures, whereas they made the unexpected decision to explore a place no one has dared to step foot.

It showcased their investigation that concerns the two strange worlds in defending the United Federation of Planets.

This series is the continuation of the voyages by the USS Enterprise from the Original Series.

It's worth noting that the franchise kept the same cast aside from Ensign Chekov and included a few Original Series' sequels in its episodes, such as:

Besides that, a couple of Gene Roddenberry's concepts before the Original Series finished were presented to the fans in this movie while also allowing them to get a glimpse of Star Trek's innovative technologies like the recreation room and aqua shuttle.

Additionally, they've featured a handful of non-humanoid alien officers and species who couldn't get on board the franchise before.

The six Star Trek films are known to be:

These films took roughly three years since they wrapped up Kirk's voyage when he boarded the Enterprise. At this point, Kirk was promoted to become the Admiral at San Francisco's Starfleet Headquarters, where he got to reunite with the rest of Enterprise's crew as they collaborated to inspect the strange cloud of energy that's wreaking havoc in space.

Of course, this guide was created based on our judgment of the best way possible to binge-watch the saga. However, you're free to go with another option, such as either watching the series based on in-universe continuity or released dates.

Yet as a novice Trekkie, we highly recommend going for the chronological order as the Star Trek shows and series are composed of two distinct timelines that could confuse you.