Is Morocco's cyber espionage the last straw for Algeria? 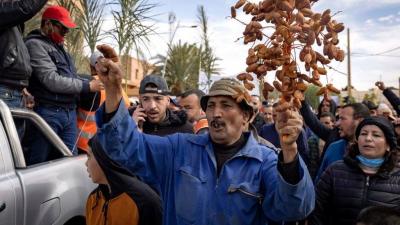 NEW YORK —Days after the most recent flare-up between Algeria and Morocco over the thorny issue of Western Sahara, the Pegasus scandal is further straining relations between the two North African neighbours. For many observers, the large-scale cyber espionage by the Moroccan Makhzen, or deep state, targeting Algerian officials and civil society activists using Israeli-made Pegasus spyware came as no surprise.

The investigation by Forbidden Stories, a network of journalists dedicated to protecting journalists and fighting censorship, has revealed how Moroccan authorities extensively used Pegasus. They infiltrated communications across the globe, sparing neither their rivals, such as Algeria, nor their allies, such as France. Even French President Emmanuel Macron was targeted.

In a statement, the Moroccan government said it "categorically rejects and condemns these unfounded and false allegations," and will sue both Amnesty International and Forbidden Stories for defamation.

Pegasus is spyware developed in 2013 by an Israeli company, NSO Group, in collaboration with the Israeli Defense Ministry.

As for the "users/clients" of NSO Group and Israel, there is a pattern of divisive far-right regimes, such as Hungary and India, and authoritarian governments in the Muslim World, such as Morocco, Saudi Arabia, and Azerbaijan, in addition to scores of Sub-Saharan African dictators. The common denominator for all these regimes is their desire to spy on their own citizens.

According to a Foreign Affairs Ministry press release, Algerian authorities denounced the large-scale espionage on Algerian citizens and officials, calling the practice "illegal, unwelcome and dangerous."

Forbidden Stories and Amnesty International revealed that 6,000 Algerian phones have been identified as targets of the Pegasus spyware. Some of these targets are senior officials, high ranking military officers, political activists, academics, journalists, as well as members of various intelligence services.

"Morocco has managed to wiretap an extensive cadre of political operators, including former president Bouteflika's close family, various foreign affairs ministers, the Algerian ambassador in France and his military attaché"

Despite a 1963 border conflict, called the Sand War, which claimed the lives of hundreds of people, and ultimately defined the two sister countries' acrimonious relationship, Algeria and Morocco share a common historical and cultural heritage

Yet, the post-independence regimes of both countries have failed to translate that solidarity into efficient and constructive policies.

Their latest tussle occurred two weeks ago in NYC when the Moroccan ambassador to the United Nations handed over a memo to the Non-Aligned Movement member countries, urging them to back up the "self-determination of the Kabyle people" in Algeria.

Kabyle separatism is a red line for the Algerian government and, following the move, Algiers immediately recalled its ambassador to Morocco and hinted at possible further measures.

In response to the allegations of Moroccan spying, the Algerian government stated that it is "deeply concerned," and the Algerian Press Agency indicated that the public prosecutor ordered a preliminary investigation regarding what he called a manifest "breach of communications".

According to Tewfik Hamel, a researcher in military and defence history, this expansive espionage goes beyond Morocco's habitual verbal hostilities.  "The two countries might be on the brink of war," he told The New Arab.

"The Algerian government has opted for a restrained response, as the Pegasus operations reveal the limitations of its own surveillance system"

So why did the Moroccan government embark on such an intensive operation against Algeria? The decades-long dispute over Moroccan sovereignty regarding the territory of Western Sahara seems to be one motive.

King Mohammed IV has been so far unable to sell his plan for the autonomy of the annexed Western Sahara region. Algeria, meanwhile, has backed the Polisario Front which has been fighting to establish an independent state since the 1975 withdrawal of Spain - the former colonial power - with Morocco considering Algiers to be an active stakeholder in the conflict.

The second motive is likely the normalisation of diplomatic relations between Morocco and Israel. The deal, brokered by the Trump administration, which agreed to recognise Moroccan rule over Western Sahara, and which the Biden administration has endorsed, has exacerbated frictions with Algeria.

When the revelations were brought into the public eye, the Algerian government opted for a restrained response. It tried to minimise the impact of the "Pegasus Project," as the scandal revealed the limitations of its own surveillance system.

Algeria had already acknowledged the deterioration of its relations with Morocco, as the countries lean towards opposing world powers. In 2019, Russia accounted for 66 percent of  Algerian weapons imports, making the country its largest  African client. On the other side of the border, Morocco  has opted for advanced US jets and a  dlrs 700m French-built spy satellite.

Though the nearly 50-year-old enmity between the two countries may have reached its apex with the Pegasus scandal, it is unlikely that Algeria and Morocco will embroil themselves in a full-blown conflict as Rabat's cyber-espionage operations are indicative of a wider change in modern warfare.

Cyberwarfare is not about destroying military forces on a battlefield, but about dictating one's will to an out-manoeuvred rival. And this is exactly what the Moroccan authorities have tried to achieve in Algeria using cutting-edge Israeli technology.

Dr Abdelkader Cheref is an Algerian academic and a freelance journalist based in the US.

He holds a PhD from the University of Exeter, Institute of Arab and Islamic Studies. His research interests are primarily politics in the MENA region, democratisation processes, Islam and Islamism, and political violence with a special focus on the Maghreb (North Africa).