SORRENTO – Bouncing back from a two year slump in tourism due to Covid and Brexit the managers of the dazzling Hotel Mediterraneo in Sant Agnello are offering a constellation of amenities and services to attract back both the traditional British clientele of the Sorrento peninsula but also discerning tourists from the United States and Italy as well as the Middle East and Eastern Europe.

Britons have been coming to Sorrento since the 18th century grand tour and the town became a favourite for the English, Scots and Welsh after British forces liberated Naples during the Second World War. The Hotel Mediterraneo, built in 1912, has always been the family home of the Monti family and began taking in guests after it was used to house displaced refugees from northern Italy during the second world war, some of whom decided they wanted to stay on, Pietro Monti, the director of marketing, recounts.

Before the Coronavirus pandemic as many as 20 charter flights a day would land in Naples, he recalls. The Sorrento peninsula and the adjacent Amalfi coast were one of the most popular destinations for foreign tourists after the art cities of Rome, Florence and Venice. The enchanting hotel still had a number of reservations this year from longstanding British clients for August and September but the requirement for them to quarantine has meant that many are cancelling their bookings. In response Sig. Monti has sought to bolster the Italian clientele at the hotel, which has recently been upgraded to 5 star status following the restructuring of a number of rooms into luxury accommodation or junior suites in a refurbishing carried out by the English architectural firm THDP from 2017.

The rooms are now fashionable and highly functional architectural solutions made with raw materials typical of the coast – table tops and bedside tables in Vesuvian lava, parquet flooring that recalls the stilts built on the sea expand the Sorrento beaches, fishermen style lamps, decorations and wardrobes in brass, a material whose processing is rooted in the Neapolitan tradition.

In addition the hotel, family-run like most in Sorrento, has improved its gastronomic standing and transformed its roof terrace bar into a stunning SkyBar frequented by show business celebrities with panoramic views across the bay of Naples to the smouldering Vesuvius volcano and the picturesque island of Capri, where guests can make exciting side trips aboard the hotel’s powerful motor yacht.

The hotel’s genial director and owner Sergio Maresca, a cousin of Pietro, usually is to be found chatting with hotel guests on the terrace after a busy afternoon fishing for some of the succulent catch served up in the hotel’s restaurants. During a three night-stay at the Mediterraneo, no kindness was too much for Sig. Maresca and his efficient staff to bestow on guests.

“In the past our restaurants’ menus would have earned 10 out of 10 from Anglo-Saxon customers,” Pietro allowed, “but perhaps eight from Milanese and only six from Neapolitans. We had burgers with potatoes but no clams.”

In addition to the top chef in the Vesuvio restaurant, the hotel also offers cooking lessons on request. We attended a lesson on how to make pizza offered by Benito, a venerable figure who has been the pizza chef at the oven by the swimming pool for half a century and has become the historic memory of the establishment.

At 11 a.m. we enjoyed slices of zucchini pizza and more unusually lemon pizza featuring the famous lemons of Sorrento, plucked from the nearby grove nurtured by Cataldo, where powerful limoncello liquer and marmalade are made. One brave colleague washed down his pizza with a pre-prandial beer. There is no excessive formality at the Mediteranneo where guests are expected to have fun as well as learning more about hallowed traditions of the peninsula.

With Italians making up more of the clientele this year there has been more demand for the hotel beach facilities whereas English tourists were content to swim in the hotel’s ample pool. Sorrento has few beaches and has sought to compensate by building floating platforms off the coast. Hotel owners admit they cannot compete with Apulia, Sardinia and Tuscany as a beach holiday destination though a group of journalists who were ferried to Capri on the hotel Mediterraneo’s 750 HP motor yacht were able to enjoy the fantastic swimming facilities off the island featuring some of the most beautiful sea in the Mediterranean.

A key factor in the attraction of the six comuni or towns of the Sorrento peninsula always has been their tranquility and the apparent absence of the organized crime that has infested Naples and other parts of the nearby coast such as Torre Annunziata.

“We are like a little Switzerland,” Pietro says, “there is no crime here. This is partly because there is only one main access road, so it can easily be controlled by the forces of law and order, but also because the people of Sorrento like to do business with each other and outsiders tend not to be welcome.”

Also enhancing the standing of the hotel is its Spa built in the tufo foundations in 2018, offering customers the opportunity to have a week-end dedicated to wellness. It is described as a true oasis of relaxation, illuminated by natural light during the day and by a suggestive starry vault in the evening. On offer is the classic wellness programme including emotional shower, sauna, Turkish bath, Jacuzzi and relaxation area with herbal tea.

In all there are some 120 hotels on the Sorrento peninsula, mostly in private hands. Impersonal hotel chains have made almost no inroads into the area though there has been a proliferation of B & B and RB&B accommodation as Neapolitans sold off second homes. Family hotels are undoubtedly friendlier though some hotels have remained behind the times.

Marketing of Sorrento has been “a disaster,” Pietro acknowledges. It does not exist at a provincial elvel and has only been done privately by the Federalberghi association of hotel owners. Otherwise each of the six comuni has promoted only itself.

In the past the Sorrento season tended to peter out around November but this year the Mediterraneo is hoping to attract visitors up until January. I have fond memories of a New Year’s Eve I spent in Sorrento with my young family in the 1990s, allowing us to enjoy the fantastic firework display in the Bay of Naples from a serene and civilized vantage point.

Sorrento also is an increasing player in event tourism, notably for weddings. In addition to building up their Italian clientele and consolidating the traditional Anglo-Saxon connection, Pietro and his colleagues have begun seeking new customers in the Middle East and Eastern Europe.

The city of Sorrento with its leafy avenues and many churches is replete with other gastronomic charms that make for delicious side trips including the Michelin starred Il Buco restaurant and the Donna Sofia where until recently Sophia Loren was a regular visitor. 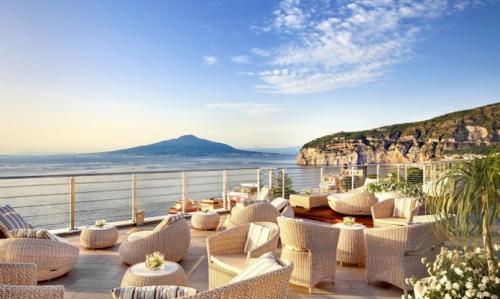 Panorama of Bay of Naples from the SkyBar 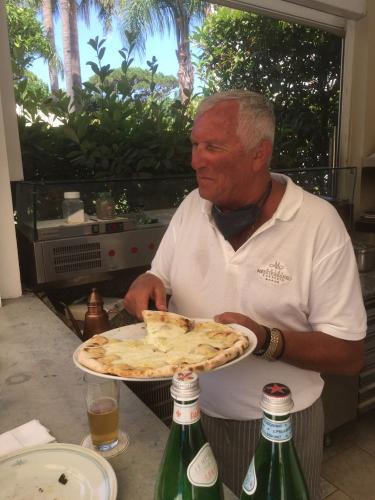