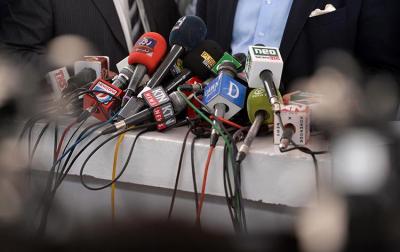 ROME - A report published by the Department of Public Security has revealed that the intimidation of journalists in Italy has increased consistently since 2018 and that in terms of threats, assaults and acts of vandalism, Lazio is the most dangerous region to be a journalist.

In 2018, there were such criminal acts reported, in 2019 87, in 2020 there were 163, and there have already been 110 in the first half of 2021. Of all these cases, the largest notable category is threats of a 'socio-politicial' nature, which make up for roughly 30 to 40 percent of all cases. Close behind are threats from criminal organisations, which account for around 15 to 20 percent of all these cases of intimidation.

The report also details how threats and intimidation through social network platforms have massively increased, accounting for around 24 percent of cases in 2018 to 50 percent in 2021. After online threats, the largest category is incidences of physical aggression and assaults, followed by verbal threats, with a small minority of cases being vandalism or the sending of threatening objects.

"For years we have denounced the difficulties in carrying out the profession in this region and the framework that this report gives us confirms our worries. All the more so when we read that many colleagues, often of small newspapers and without any coverage, prefer not to report. The practicability of the profession for those who want to practice it properly is at risk and we must keep a high alert so that journalists can freely do their job.

“Threats and assaults, moreover, are combined with reckless complaints that tend to silence those who tell the truth, so that in 99 percent of cases the complaints are dismissed. The ASR is at the front line, alongside our threatened colleagues, and will be a civil party wherever our colleagues have filed a report and it goes to trial. Our appeal to all colleagues is to report because we will be at your side.”