D'Amato blames 'Gravina effect' for rise in cases in Rome 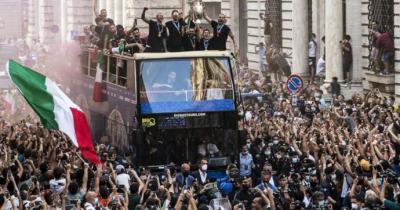 ROME - The Regional Assessor for Health for Lazio, Alessio D’Amato, has pointed the finger of blame at Gabriele Gravina, the President of the Italian Football Federation (FIGC), for the huge rise in the number of covid cases following the celebrations for Italy winning the Euros.

Almost ten days after the celebrations began, on Tuesday Lazio recorded 681 new positive cases, and 557 just in Rome, compared to just 164 on July 11, the day of the final.

At the time Gravina strongly defended the celebrations, in which thousands of Italians took to the streets with all covid restrictions temporarily lifted, having to convince Roman authorities to allow the open top bus parade.

Several politicians, including D’Amato and Rome Prefect Matteo Piantedosi, had criticised the celebrations, worrying about a rise in cases. Their worries seem to have been confirmed, though at the moment hospitalisations still remain relatively low.

D’Amato has now said, “we are paying the so-called ‘Gravina effect,’ but without complications in hospitals.”

He continued that “the cases are still going to increase due to the effect of the ‘power outage’ on the occasion of the Euros celebrations, which will last a few days. Those positive are mostly young people still not vaccinated and this means, once again, how important it is to vaccinate and reach herd immunity.” He emphasised how "once again, the burden and effects of the ‘power outage' are on the shoulders of the Regional Health Service and its operators.”

There was also recently a huge outbreak in a bar that was showing the final in Monteverde, a neighbourhood of Rome, where 100 cases were reported following the final.