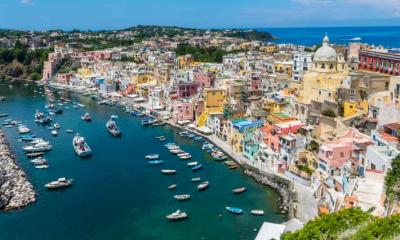 The island of Procida

PROCIDA - The Procida Film Festival 2021, organised by the cultural association Meridiano 14 in collaboration with the Region of Campania and the municipality of Procida, has reached its 11th edition and flies ever higher, achieving every year greater success.

The island of Procida, Italy’s Capital of Culture for 2022, is the enchanting setting where this international event will take place, with the participation of 511 short films from 67 different countries: Italy certainly, but also Iran, India, USA, France, Latin America, Asia, Europe and the Middle East.

The selection of works taking part in the festival has already begun and by Aug. 20 the list of chosen works will be made public on social media and the festival’s website (www.procidafilmfestival.it).

The winners of each category will be voted for at an elegant gala evening during the festival.

The juries that decide the winners are made up of experts from the film industry, as well as from art, culture and theatre.

The island of Procida, therefore, acts as a promoter of cinema and does so among its many colours and scents, between passion and traditions, between the peculiarity and flair typical of a land that is a manifestation of a culture, a land that knows how to spread itself beyond the borders of the island and Italy.