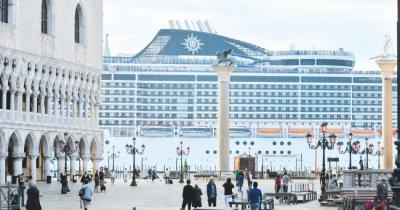 VENICE - The Italian Minister for Culture Dario Franceschini has announced that from August 1, large cruise ships will no longer be allowed to pass in front of Saint Mark’s Basilica or down the Giudecca Canal, instead having to dock in Marghera Port.

Ships with 200 passengers or fewer will still be able to dock at Venice’s Marittima port.

The announcement, which came from Franceschini’s Twitter, had been expected for a while, after news was announced that the Minister backed the movement to prevent large cruise ships from clogging the Venetian waterways.

Franceschini said, "It is a historic day, after years of waiting from all over the world. It is a decision awaited by UNESCO and by all those who have been to Venice and were upset by the size of these ships they saw passing through the most fragile, beautiful place in the world. An important decision that meets requirements of UNESCO, limiting traffic to ships of less than 25,000 tonnes, and establishes a mandatory rule, declaring the urban waterways of the Basin of San Marco, the San Marco Canal and the Giudecca Canal a national monument.”

There will also be 157 million euros in funds for at least four temporary disembarkation points in Marghera, to be managed by Venice’s Port Authority, and offshore landing places are being planned.

There are several other regulations that cruise ships coming into Venice must also abide by. The hull must be no longer than 180 metres and the sulphur content of the fuel being used must not exceed 0.1 percent.

Franceschini added, “there will be compensation for those who will be damaged by this initiative, but Italy is finally turning the page.” Cruise companies and many involved with the management of the waterways around Venice will be compensated.

Palazzo Chigi released a statement saying, “the decree constitutes an important step towards the protection of the lagoon system in Venice. These rules intervene immediately with the necessary precautions and compensations to mitigate the employment impact on the sector and are accompanied by the competition of ideas, whose notice has already been published, for the future realisation and management of berthing points outside from the protected areas of the lagoon with the objective to make cruise activity compatible with the safeguarding of the landscape and environment.”