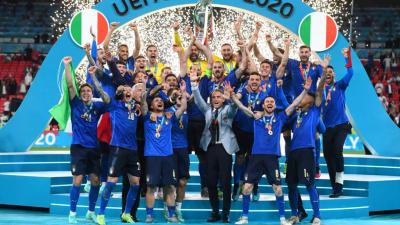 LONDON - Italy have beaten England to win the 2020 European Championships, their first since 1968, and sixth major international football trophy. With the game drawn 1-1 after 120 minutes, Italy won 3-2 on penalties.

Having failed to qualify for the 2018 World Cup, a huge upset for the Azzurri, this victory is a huge vindication for an Italian side that many believe had their best days behind them. Italy have only lost two of their 39 matches since Roberto Mancini took over, and Italy will be hoping this is only a sign of good things to come.

While Italy have smashed England’s hopes of ‘football coming home,’ the 2022 World Cup is less than a year and a half away and England will be able to take many positives from their tournament performance, going to Qatar full of confidence in what they have achieved with such a young team.

The England squad for the Euros had an average age of 25.4, compared to Italy’s 27.8, and only Turkey had a younger squad in the tournament. England will now be hoping to use this tournament to add experience to their youth and talent, and go one better at the World Cup next November.

As Vittorio Sabadin writes in La Stampa, “England has lost, but no fear: no one like the English can turn defeats into victories. Despite the bitterness and the rain, people crowded the streets of London until late at night, and many easily drowned the disappointment with beer.”

The match couldn’t have started any better for England, with a goal after just a minute and a half. Harry Kane plays the ball down to Kieran Trippier with bags of space on the right hand side, who lofts the ball over the Italian defence to left-back Luke Shaw at the far post, who hits a sweet half-volley past a hopeless Gianluigi Donnarumma.

The rest of the first half was a close affair; though Italy dominated possession, England, defended very well, put lots of pressure on Italy when they had they ball, and in attack looked very dangerous. With referee Bjorn Kuipers not penalising many soft fouls, the match at times was very back and forth, with both teams managing to cut into the box and create chances.

The second half, however, Italy stepped up and began to look more like the side from the first few matches of the tournament, with brilliant attacking football and patient, measured passing. England looked like they were perhaps beginning to tire, having been defending for much of the match, and Italian forwards Federico Chiesa and Lorenzo Insigne began to shine, the England defence struggling to keep them contained.

Italy’s equaliser finally came from a corner in the 67th minute. The ball is flicked on by Bryan Cristante and Kieran Trippier tussling at the front post, it bounces to Marco Verratti, whose header towards the bottom corner is brilliantly saved by Jordan Pickford, but it bounces off the post to the feet of Leonardo Bonucci, who can tap it in past a lunging Harry Kane.

After half an hour of extra time, in which Italy seemed to be getting better and better, still with masses of energy having used all six of their available substitutions (while England only replaced four tiring players), the unavoidable penalty shootout finally arrived, something that England given their history were definitely trying to avoid. 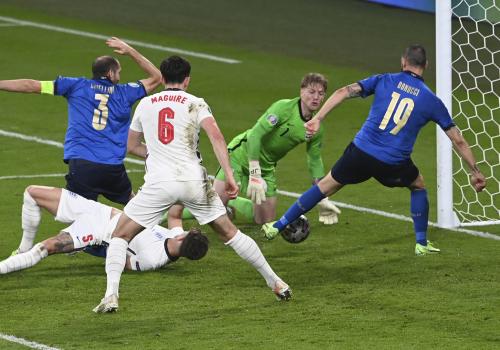 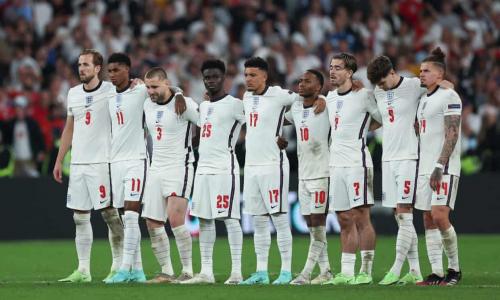 A dejected England side during the penalty shootout.
World
Italy
Sport