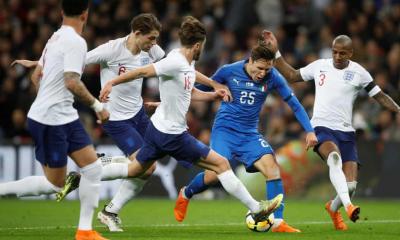 The last time Italy played England, a 1-1 draw at Wembley.

LONDON - With only a 1,000 Italian fans being allowed to fly out to Wembley for the final of the European Championships, it will be an exclusive group. It has now been revealed exactly how exclusive, with the journey costing 700 euros per person; 610 euros for the flight and 95 for the match ticket.

UEFA have allowed the Italian Football Federation to fly out 1,000 fans in chartered flights (no regular flights allowed), to be sat in a separate, reserved section of the stadium.

With such a limited number allowed, as a result of anti-Covid restrictions and fear surrounding the Delta variant, Il Fatto Quotidiano has predicted that there will be five times as many English fans at Wembley than Italian.

Of the 65,000 fans on Sunday, it is expected that at least 60,000 will be UK residents, the only people allowed a no-fuss journey to the ground. Apart from a small contingent of Italian residents in the country, the rest will be English, providing an unavoidable advantage to the home team.

This advantage has the Italian press buzzing with accusations of favouritism by UEFA, or at least just poor organisation. England have played all their matches so far at Wembley, bar only one, and while this does make sense logistically and safety-wise, many teams who have been forced to travel thousands of miles for their matches are understandably bitter.

Many European leaders, Mario Draghi included, have attempted to fight the Wembley final on the grounds of the risk of the Delta variant currently sweeping through the UK (and for some, Il Fatto Quotidiano suggests, an anti-Brexit thing), but they were unsuccessful.

While typically in major tournament finals the home side is thought to have an advantage, the home side hasn’t won the Euros since 1968, when Italy beat Yugoslavia at the Stadio Olimpico.