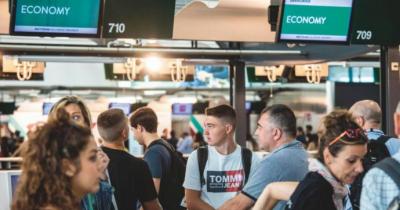 ROME - With Delta variant cases rising around Europe, most notably in the UK, Italian authorities have begun to worry about how well the country is prepared to face the summer influx of tourism, with particular concern regarding how airports plan to contain positive cases.

The travel writer Barbara Gallucci, flying into Milan Malpensa from Lisbon, wrote, “Checks on arrival? Let’s not joke, at the airport there wasn’t even a shadow of them.”

When England played Ukraine in Rome on Saturday, Italian authorities ramped up checks at the airport and the border to make sure that everyone either had proof of a negative test, or took one on site, and then quarantined for five days.

However , there were several allegations, according to Il Fatto Quotidiano that some Ukrainian fans had all too easily flown into Italy from Ukraine with false documents and test certificates (all non-essential travel from Ukraine to Italy is banned).

Furthermore, since then, people flying into Italy have raised concerns that the country is not doing enough to stem the flow of possible spreaders of the more contagious Delta variant.

In the UK on Sunday there were 24,248 new cases of coronavirus, and the country is now back up to the same levels as the January peak. Around 90 percent of these cases have been blamed on the Delta variant. Meanwhile on mainland Europe, cases in Spain have tripled in the last week, with about of 30 percent of new cases being put down to the Delta variant.

Though Spain are considering readopting some restrictive measures to fight another peak, the vast majority of these new countries’ new cases are among under 30s, and so both countries are hoping that there won’t be enough hospitalisations or deaths to justify another lockdown.

With the UK in fact planning to scrap the majority of restrictions in two weeks, the government has once again been accused of putting young people at risk, particularly of long covid, in the aim for herd immunity.

What this means for the rest of Europe, however, is that the many European countries, Italy included, trying to open up and welcome back tourism, are at risk of the Delta variant.