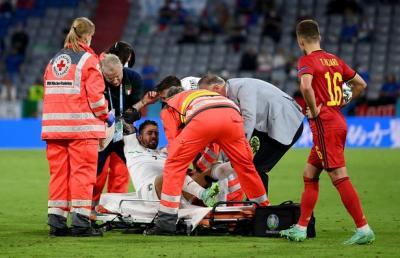 LONDON - Italy are gearing up for their Euros semi-final against Spain at Wembley on Tuesday night, though preparations will be marred by the absence of Leonardo Spinazzola, a shining light of their tournament so far, out with a ruptured achilles tendon he sustained in their quarter-final against Belgium.

Roma’s Spinazzola was picked at left-back above Emerson Palmieri, the Brazilian-born Chelsea left-back, for all of their Euros matches so far, in one of the many decisions that manager Roberto Mancini has got right throughout the tournament, providing the oppportunity for one of the breakout players of the tournament (at least for non-Italian audiences).

Palmieri, who had allegedly wanted to quit football as a teenager if his mum hadn’t persistently taken him to training everyday, has only played 15 times for Chelsea this season, and is arguably their third choice left-back. He will be looking to redeem himself at the stadium where just over a month ago Chelsea won the Champions League without him.

Italy and Spain haven’t played each other since 2017 (a match Spain won 3-0), but the two have played each other in each of the last three European Championships, with Spain knocking Italy out in 2008 and 2012 (going on to win both tournaments), and the opposite happening in 2016 with a 2-0 victory for Italy.

Aside from Spinazzola’s absence, Italy’s line up on Tuesday night is likely to be much the same as in their quarter final against Belgium. Giorgio Chiellini will undoubtedly start at centre back, winning his 111th cap for the Italian national side, only one less than Italy’s legendary goalkeeper Dino Zoff.

The only other decision Mancini is expected to make is that of who will occupy the right wing, either Juventus’ Federico Chiesa, who started, for only the second time this tournament, against Belgium, or Sassuolo’s Domenico Berardi, who seems to have been Mancini’s first choice in the opening matches to occupy the third attacking position (with Immobile and Inisgne) in Italy’s customary 4-3-3.

Spain coach Luis Enrique meanwhile has more difficult decisions to make. With Pablo Sarabia out with an injury, Enrique will have to choose between Gerard Moreno and Dani Olmo to replace him. Enrique may also rethink the centre back pairing of Pau Torres and Aymeric Laporte, who have not been so convincing.

Alvaro Morata, despite much flack from fans over his inability to score, is likely to start up front against his two Juve teammates, Chiellini and Bonucci, who undoubtedly know him well. 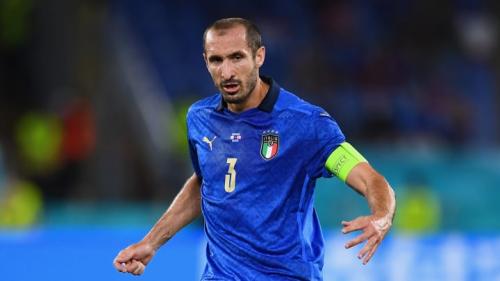 Giorgio Chiellini, who is preparing to win his 111th cap for Italy.
World
Italy
Sport