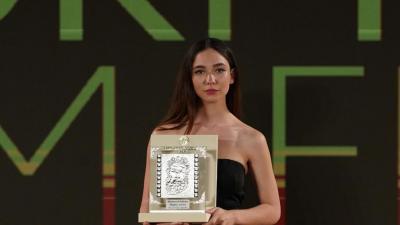 Matilda De Angelis, took the best actress award for her performance in Atlas.

TAORMINA, Sicily – Thousands of cinema buffs climbed into seats in this hilltop town’s ancient Greek amphitheatre as the most innovative film festival in the southern Mediterranean re-opened for business  with a dazzling constellation of films screened under the Etna volcano after the extravaganza had been suspended for two years due to Covid-19.

The Taormina festival has long been a laboratory for youthful cinematic talent and Matilda de Angelis, 25, continued the tradition by winning the best actress award for her stunning performance in Atlas, a gripping movie filmed in the Alps and the Dolomites in which director Niccolo Castelli explored the impact of terrorism in Morocco on the lives of young people from the Italian Swiss city of Lugano who take their passion for climbing to the Atlas mountains.

Castelli had hoped to shoot part of the film on location in Morocco but authorities in Rabat refused permission to go to the Atlas after two Scandinavian young women were decapitated by Isis in a gruesome reminder of the relevance of the project, the director told a press conference. Castelli acknowledged that the film may never be seen in north Africa. “When they hold festivals in Marrakesh or Algeria the public is carefully chosen, sometimes to allow only foreigners to see sensitive work.”

The jury gave German maestro Daniel Bruhl, 43, two awards for best film and best actor in “Next door,” a psychological thriller that already had won plaudits at the Berlin film festival.

For the first time in what some critics saw as a worrying development the festival allowed a film funded by Netflix, A classic horror story, to take part in the competition, and its young co-directors, Roberto De Feo and Paolo Strippoli, won the award for best director.

The Venice film festival had already set a precedent in that regard, however, though Taormina scored a first among festivals by suspending the screening programme in the Greek theatre so that the Italy Belgium football match in the European championships could be shown there.

To mark the return of the Sicilian festival a leading Palermo architect decorated the central Corso of Taormina with a street installation of metallised gold and silver ribbons stretching as long as 800 meters. In all the architect, Laura Galvano, used 130,000 ribbons for the glittering installation, which she entitled "Ciak... si torna a girare."

"The urban installation, with its movement, the sound produced and the reverberation of light, pays homage to the art of cinematography."  said Arch. Galvano.

"The artifice is aimed at being auspicious for the return to normality, after the hard blow inflicted by the pandemic on all of humanity," she said. The installation was due to remain in place in Taormina to July 15.

The return of the festival will surely help to kick-start a revival of tourism in Sicily this summer, the alderman for tourism in the regional government, Manlio Messina, said. “We have had two very difficult years due to Coronavirus,” he told the Insider, “now we have 18 months of hard work ahead to recover lost ground in the tourism market.”

Short films screened at the festival echoed Atlas in probing the theme of strong women coping with adversity, including Fabrizio Sergi’s powerful ‘Scharifa,’ filmed at Santa Teresa di Riva, in which Khadija Amzil plays a Moroccan immigrant working as an assistant in a small theatre who has to deal with unforeseen circumstances that threaten a performance of a play by Sicilian author Pirandello.

Salviamo le elefanti, shot by director Giovanna Brogna Sonnino in the streets and squares of Catania, features Lucia Sardo as Agata, a cleaning lady living precariously who manages to change her life radically after meeting a lonely child.

Historic films screened not in competition included Florestano Vancini’s Bronte, a restored version of a 1972 movie for which Sicilian writer Leonardo Sciascia wrote the original screenplay about the mob brutality unleashed by the conquest of the island by Garbaldi and the repression by Piedmontese forces that followed.

French actress Catherine Frot received a warm welcome for her performance in Pierre Pinaud’s Lady of the Roses (out of competition) about a family horticultaralist firm’s battle to survive against big business.

Neapolitan director Gianluca Jodice received an award from the national tourism agency ENIT for Il Cattivo Poeta, a historical drama about the life and loves of the poet Gabriele D’Annunzio, which was filmed at the narcissistic bard’s Vittoriale home, now a museum, on the riviera of lake Garda, another area that has seen a sharp revival of tourism from Germany and northern Europe.

In addition to the menu of films, participants at the festival were able to enjoy a rich programme of conferences with directors including a barrage of amusing anecdotes from Ferzan Ozpetek about his career in Italy and a discussion with Sicilian director Giuseppe Tornatore about his forthcoming film on the life of his friend the temperamental composer Ennio Morricone.

In another first the direction of the festival was shared between three leading Italian film critics for national newspapers,  Alessandra De Luca, Federico Pontiggia e Francesco Alò who succeeded in the difficult task of preparing a festival amid months of uncertainty whether it would be able to take place or if a nationwide curfew would be lifted in time for spectators to enjoy films that were shown in the cooler temperatures in the later hours of Taormina’s enchanting summer evenings. 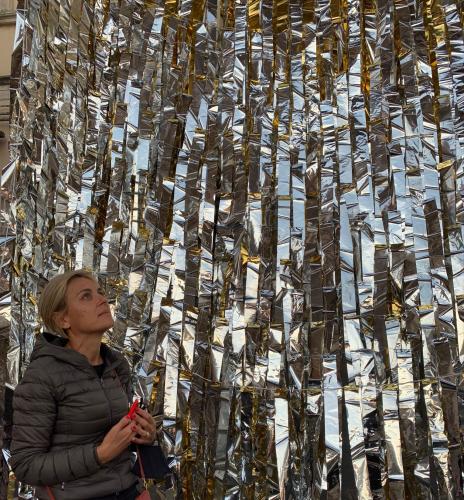