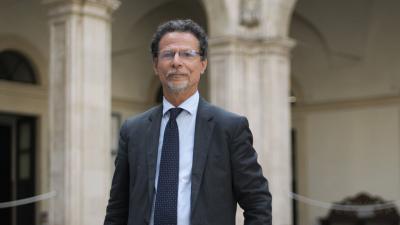 Professor Francesco Priolo, rector of the University of Catania, a saving grace for some lettori.

CATANIA - The universities of Catania and Milan have finally agreed, to differing extents, on a contract with the aim of paying wage arrears to foreign 'lettori', victims of national discrimination, historically paid less than their Italian colleagues.

The European Court of Justice has found Italy to be in breach of EU single market rules, that prohibit unfair discrimination based on nationality, in six rulings concerning non-Italian teachers called “lettori” working in Italian universities.

Following a 2001 ECJ ruling in, the Italian state enacted law 63 in 2004 that pegged salaries of the “lettori”  to that of part time researchers. However, this law did not provide funds for the universities to implement it. Lettori seeking compensation could only seek redress in local courts.

The domestic courts have been hearing lettori for cases for arrears in unpaid wages and pension contributions in their hundreds, in some 20 universities. Only one university, Palermo in Sicily settled its lettori cases, in 1998, in conformity with EU law.

The European Parliament Committee on Petitions has been particularly assiduous in its support and has reported that “blatant discrimination on grounds of nationality was revealed on numerous occasions in the case of foreign language teachers (‘lettori’) in Italy, who have been struggling for decades against discriminatory treatment with respect to security of tenure, career development, pensions and social security.”

On November 20, 2017, the Italian Ministries of Finance and Higher Education produced a model collective supplementary contract and some funding with the aim of putting an end to the litigation.

The University of Milan adopted the model contract on June 30, 2021, and it appears to be capable of bringing the Milan case involving 20 lettori to a closure.

The University of Catania adopted the model contract on June 23, 2021, but in a way that will not resolve the dispute for 20 lettori there, citizens of Australia, France, Ireland, Malta, Spain and the United Kingdom.

In particular, the contract, excludes compensation for the majority of lettori - who have recently retired or are about to retire.

Prof. Avv. Lorenzo Picotti who has successfully pled lettori cases in the ECJ and who represents lettori in Catania said:

“The violation of economic rights is aggravated hugely by the unreasonable duration of the legal process in Italy, with the consequence that lettori have lawsuits that last for decades, those in Catania, for example, await the decision the supreme court of Cassation on an appeal that began in 2001 and meanwhile they had to start another case for the next tranche of arrears. It has already taken seven years for this case to get a decision from the lower court. Many have retired, others have given up, some are deceased.

The mere fact that these lettori are non-Italian workers, forced to sue for wages and pension rights that should have been paid to them unilaterally, is a further breach of EU  law that prohibits discrimination based on nationality.

The injustice that they continue to suffer is unacceptable. The European Commission as guardian of the rights of all European citizens, enshrined in the treaties, must act with energy and timeliness to fulfil its task. “

British lecturer Ann Davies, said "On the eve of my retirement,  I can say that the situation at Catania University has gone from bad to worse, especially in the last 3 years when our salary has been less than half of what it should have been if the rulings of the European Court of Justice had been respected and applied. With the new contract proposal,  I stand to gain nothing for the future or the past unless I continue to wander through the labyrinths of the Italian judicial system! Who knows if I will ever find the exit!!”

British lecturer Teresa Giblin said: Professional, dedicated service means little to the University of Catania where inequality exists among  "lettori", whose salaries oscillate between 1,000 to 1,800 euros net, regardless of seniority or responsibilities.  Promises to rectify the situation from the Rector in a pre-election meeting were not maintained.  Almost 2 years later, this University, which is entitled to draw from special ministerial funds and thus give closure to litigation, stipulates, in a new contract, that lettori have no right to arrears. Why remains a mystery.

British/Irish citizen Chantal Howell said “When I tell friends that after nearly 40 years of working at Catania university, my final salary was 40% less than that of younger colleagues doing exactly the same work, they struggle to believe me. Lettori at Catania university are paid according to the success or failure of a long series of court cases and not according to the parameters set by EU law. There are now ministerial funds available to redress the injustice but so far there is no indication that arrears will be forthcoming in Catania.” (attached Ms Howell pay slip November 2020)

ALLSI (Association of Foreign Lecturers in Italy) chairman David Petrie said, “It should not be difficult to resolve the situation in Catania. The key is the Rector, Professor Francesco Priolo. Catania has been mired in an alleged corruption scandal, the so-called “Università bandita,” and Rector Priolo has vowed a new era of transparency, where nothing would be swept under the carpet.

"Professor Priolo, an EU enthusiast, has noted that Europe is putting in place many tools to support Next generation EU, including a 750 billion euro package. Under his Rectorship the University of Catania has reversed past deficits and its recently approved balance is now showing a very healthy profit, some of which is earmarked for teaching. 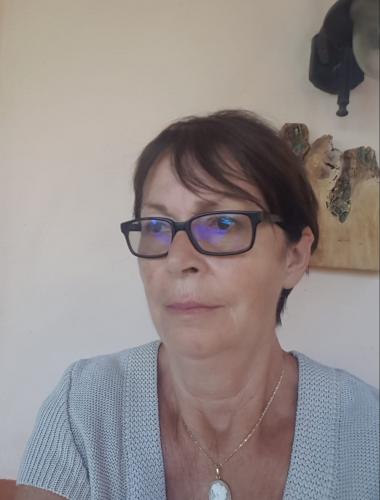 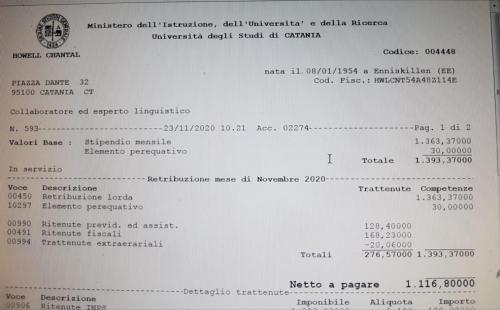