PETA pleads for an olive tree to replace pork statue 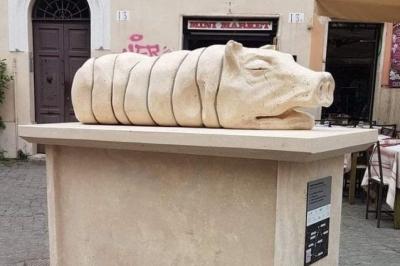 ROME - The PETA, People for the Ethical Treatment of Animals, have sent a letter to the mayor of Rome, Virginia Raggi, and to Sabrina Alfonsi, president of the municipality of Trastevere, Rome, asking for an olive tree to be planted in place of the controversial spit-roasted pork statue.

In the letter, the group has offered to pay for the planting, saying that an olive tree would inspire visitors to lead a healthy, cruelty-free lifestyle.

Moreover, the tree would pay tribute to over 300,000 vegans and vegetarians from Rome, may of which had scorned the “dead pig.” The statue was in Piazza di San Giovanni della Malva.

“As well as being a positive symbol of Italianness and a making pleasant frame for touristic photos, the tree would also represent an olive branch extending towards all those who took offence from the choice of the statue and its evident celebration of animal cruelty,” writes Patrizia Re, business consultant at PETA.

The letter signals how one Roman in ten chooses not to eat animals and the vegan lifestyle has a global trend which is continuing to increase. According to Google, the search for vegan content increased by 47 per cent in 2020 and being vegan is doubly as popular as it was five years ago. Every person that becomes vegan saves almost 200 animals every year and reduces the risk of suffering from cardiovascular illnesses and other health problems, given that vegan food, which includes olive oil, is naturally cholesterol-free.