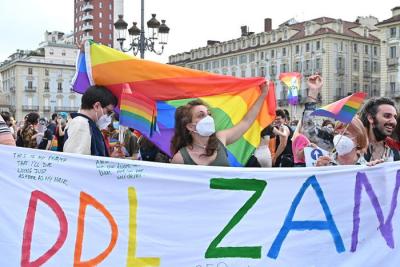 ROME - After the Vatican’s controversial note to the Italian government on Tuesday requesting modifications to the proposed new law regarding homophobic and transphobic discrimination, DDL Zan, several high-ranking Italian politicians spoke out against the Vatican’s actions.

Speaking at a joint press conference with the President of the European Commission, Ursula Von Der Leyen, on Tuesday, PM Mario Draghi expressed his wish to discuss the issue further in the Chamber. Asked about the polemics following the Vatican’s actions, Draghi said, “tomorrow I will be in Parliament all day and I expect they will ask me [about this], and I will respond in a much more structured way than I can now. It is a very important question.”

Alessandro Zan, the PD Deputy and first signatory of the proposed law, described his first reaction to the Holy See’s actions as one of “incredulity. Because this is the first time that the Vatican has asked s question about the Concordat and it does so on a law that is not yet in force and has only been approved in the Chamber, by a large majority. Parliament is sovereign, it must be free to discuss, it cannot suffer any interference from a foreign state.”

He clarified that “the freedom of expression of thought, for individuals and associations, is not in question” and that “no one’s freedom of thought, least of all the Catholics, is at risk.”

Enrico Letta, leader of the Democratic Party (PD), said “We are ready to look at the legal issues, we are open to dialogue, but we support the structure of a law that is a law of civilisation.”

Ettore Rosato, of Italia Viva, which has always pushed for more debate on the subject, said that “we will try to listen to the objections of substance that have arrived, not only from the Catholic world.”