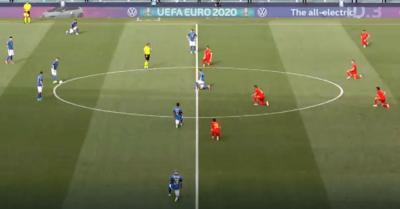 ROME - After only five Italian players took the knee before their Euros match against Wales on Sunday, President of the Italian Football Federation (FIGC), Gabriele Gravina reiterated on Monday, as Leonardo Bonucci did last week, that “we let the players be free to follow their feelings.”

Taking the knee is a symbol of support for the Black Lives Matter movement that many football teams have taking up in the last year and a half, and it has proved controversial among many fans, with some teams deciding to not take part, and a few unhappy fans booing those who do.

Though the FIGC have stressed their firmly condemn all forms of racism, they have also underlined that neither UEFA or any footballing federation have ever ruled that taking a knee is obligatory, and that every player can choose how to show their support for anti-racism campaigns.

Only five Italians took the knee (Toloi, Emerson Palmieri, Pessina, Bernardeschi and Belotti) before their match against Wales (who uniformly took the knee) and it was this split that was the cause of much discussion in Italy, and which led to Gravina making a statement.

“As a federation, we engage in every activity against all forms of racism. Everyone shows it through his feelings and his convictions. We talked about it with the boys. We knew that Wales would do it and the players were free. Some followed them, some applauded, like our fans. We let the players be free to follow their feelings," he concluded.

Before their match against Switzerland, Bonucci, the veteran centre-back, said, “to date there is no UEFA request, it is a free choice. It is obvious that from all of us there is a strong condemnation of racism.”

Claudio Marchisio, speaking on RAI, said, “there is freedom of choice, but this is a very important protest and I would have preferred everyone to kneel.”

In the Premier League, kneeling has become a common phenomenon, but it is much less frequent in Serie A, where only a few players do it, and are often booed.