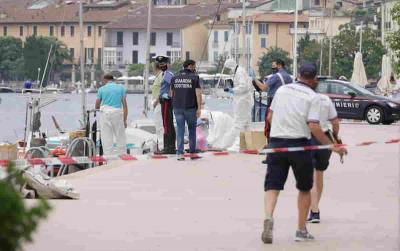 LAKE GARDA - A video of one of the German tourists, who is currently suspected of involuntary manslaughter and negligence, shows him stumbling into the water, after the accident. One of the two Germans involved refused to take the alcohol test, meaning that he could have been 'under the influence' prior to the crash.

The two male 52 year-old German tourists, who are thought to have killed Umberto Garzella and Greta Nedrotti, fled home to Germany, soon after the accident. They are still under investigation, after being suspected of killing two Italian day-trippers by driving a speedboat that careened into a small boat on this northern lake, according to the police. The accident between the two vessels left dead a 37 boating enthusiast and his 25 year-old female companion, who had rowed onto the lake to watch a vintage car race roll by on the shore, the police said. Further investigations have revealed that, if the tourists had stopped, rather than speeding away, Nedrotti could have been saved, given she died from drowning.

Having spent the afternoon spectating the “Mille Miglia” on a wooden boat, investigators suspect that the victims were later hit by German tourists, on a motorboat. It was this collision, whose strength can be seen by the significant damage to the boat, that resulted in the casualties.

The two victims: Garzella, 37, from Saló, and 25 year-old Nedrotti, from Toscolano Maderno. The body of the man was found onboard the boat at Salò, Lake Garda, while the woman’s body was recovered in the late afternoon after a day’s searching. According to the investigators, the German tourists were onboard the motorboat which had struck the victim’s boat. As evidence, wood residue has been found on the motorboat hired by the Germans. Despite the impact of crashing into the fishing boat, the Germans did not stop. the obvious Whilst they claim that they were oblivious to what had happened as "it was dark." No restraining order has being issues against them. No restraining order was issued against them.

The 37 year-old was found lying supine, so he may have been sleeping at the time of the accident. Meanwhile his companion was hurled into the water and, subsequently, drowned. At a depth of around 100 metres, she was found, in the water, with her leg partially cut due to the might of the blow.

After initial research into the incident had been conducted, it was apparent that the woman’s body had disappeared: her clothes were still on the boat, right by Garzella’s corpse. The victims' boat was found at dawn with an incision on the right side, near the bow.

Garzella was a boat enthusiast: his friends say that “he knew how to move in the water. He lived on the lake.” He worked in the field of thermal heating whilst Nedrotti was a university student.

Two eye-witnesses have described to the police what they saw: “we heard a bang. We were watching the lake when we saw a black spot that was the little boat. At times it was illuminated by a nightclub  spotlight, on the other side of Garda. The motorboat sped away without even slowing down.”

The Carabinieri have been to the hotel where the German tourists were staying, yet they are now home in Munich. The Brescian public prosecutor’s office is waiting for the results from blood tests, to see if the suspects were drunk at the time of the accident. Before the accident, the tourists had had dinner at a restaurant. 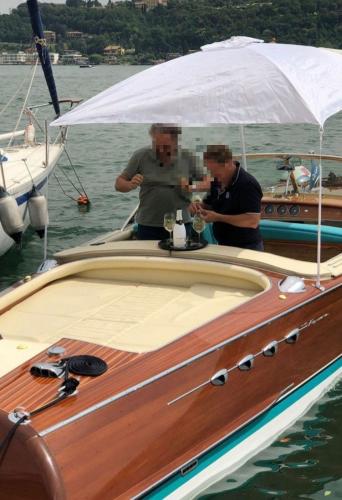