Italy beat Wales but both qualify for next round 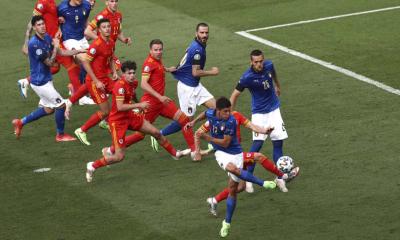 Pessina (front) scores the only goal of the match.

ROME - By beating Wales 1-0, Italy have continued their flawless start to the Euros and guaranteed their qualification into the next round, though, despite their loss, so have Wales for the second Euros in a row, having beaten Switzerland on goal difference to take second place in the group.

While Wales were hanging on with all their might to only concede one goal to the Italians, Switzerland were beating Turkey 3-1. However, having already drawn with Wales and lost to Italy 3-0, their goal difference was not enough to make it out of the group and they will now be hoping to qualify as one of the highest scoring third place teams.

The first good chance of Italy’s match in Rome on Sunday, despite their dominant possession, was arguably Wales’, when Chris Gunter’s header from a corner skimmed the top of the goal.

The first and only goal, however, came from a Marco Verratti free kick - in his first game back from a long injury - cleverly whipped around the Welsh defence for Matteo Pessina to slot home.

Another free kick for Italy in the 52nd minute almost proved almost proved fatal for Wales, but Federico Bernadeschi’s brilliant curling effort could only hit the post and go behind for a goal kick.

Just five minutes later came another crucial moment when 20-year-old Ethan Ampadu became the youngest player to ever get a red card at a European Championship, for a late crunching tackle on Bernadeschi’s ankle.

For the next 35 minutes of the match, it seemed like Wales were merely trying to hold on to the one goal deficit, knowing they would qualify for the next round unless Switzerland managed to beat Turkey by four goals - an unlikely feat.

Italy dug in and defended well, and the Welsh manager spoke post-match about how it felt like a victory, expecially given Italy’s one man advantage.

Despite Italy’s relentless pressure, Wales did manage to make some chances, with their best coming when Gareth Bale found himself completely unmarked just a few yards from the Italian goal, to only be able to sky a free volley over the bar.

Italy's round-of-16 match will be played on June 26 at Wembley, and will most likely be against Austria or Ukraine. 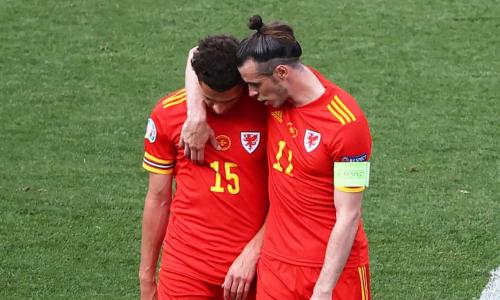