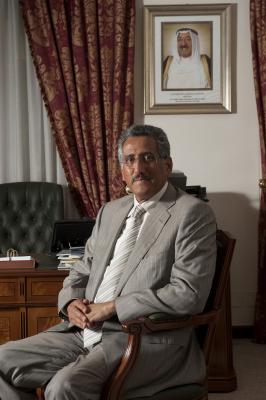 ROME– Kuwait is optimistic the Arab Spring will usher in political democracy throughout the Middle East with many countries following the Kuwaiti example of a parliamentary constitution and freedom of speech, Sheikh Jaber Dnaij Al-Ibrahim says.

“We are not acting alone, we have to move as one unit to solve the problems in our area. Also for Egypt and Syria we made our support through the Arab League. People of those countries need to have new, real democratic life because most of them were ruled by governments that were in power for a very long time.”

“As you know Egypt is voting for a new president, which is a good signal for the world community,” he says. “The Arab Spring is going in the right direction so long as there is no outside interference, otherwise the situation could become very black,” he added. The Ambassador does not mention any country that might interfere in the Arab political process by name. However the GCC countries led by Saudi Arabia and Kuwait have long been concerned about potential Iranian meddling in the Arab world.

Sheikh Jaber was accredited to the Quirinal Palace in 2009 after serving as ambassador to Saudi Arabia for five years. Kuwait has had full diplomatic relations with Rome since as far back as1964.

“Our political relations with Italy are excellent,” he says, “we always agree on many things, on the main subjects of world society. It is a very good relationship in politics and also on the economic side, in trading it is not bad.” The Ambassador adds that Kuwait is keen to strengthen the economic links still further. “We need to improve the relations in trading and investment.”

He cites the success of the Q8 constellation of petrol stations in Italy as an example of what can be achieved.

Kuwait sees Italy as an important bridge between Europe and the Arab world. “Italy has long been present in the Middle East area. There is the common history of the Roman and Arab world. Italian culture can be seen in the architecture of Cairo and Alexandria, for instance. Finding Roman ruins when you are in Lebanon makes one feel one is in Rome. Italy is very accepted in the Arab world.”

In December 2010 the ENI energy giant company Saipem signed a dlrs 1.4 billion agreement for the development of the Jurassic field in northern Kuwait. Other Italian investors are likely to be attracted to the oil-rich emirate as the Kuwaiti Government moves to compete with the UAE and Qatar.

“Dubai and Doha are taking a lot of the show now and moving fast. We have to follow them, to be a good attractive city for business.” As a strategic port from where Kuwaiti merchant princes set out to explore trade markets in India and the Far East, Kuwait City has long been open to new ideas and welcoming to foreigners.

“We have plans for Kuwait to be the economic and financial centre of the Gulf again as before, like in the 1970s and 1980s” the Ambassador explains.

Tourism in Kuwait also is being developed rapidly. Faylaka Island, which I visited as a reporter working in Kuwait in1987, sadly was destroyed by Saddam Hussein during the Iraqi invasion. Now some fishermen’s homes there have been rebuilt and the government has earmarked funds to restore the island as a luxury beach resort. “It will be a very good place for tourism,” the Sheikh predicts.

Kuwait City’s themed shopping malls packed with modern shops and the vast Kuwaiti Aquarium, one of the best in the Middle East, are major attractions for visitors who travel to the Gulf aboard the regular Kuwait Airlines flights from Rome. One tourist area on the Kuwaiti seaside just one kilometre from the country’s Parliament offers the chance to enjoy coffee, tea and traditional beans boiled with spices eaten with oven-cooked bread in the cool of summer evenings recalling the old Kuwaiti mariners’ way of life.

The Emir of Kuwait recently visited Italy and Kuwait has some nine agreements with Italy on cooperation in health, tourism, the environment and cultural exchanges. The active Kuwait-Italy friendship association based in Florence recently sent a group of journalists to visit the country and a delegation to monitor Kuwaiti parliamentary elections held in February.

Kuwait also is a major donor to IFAD and the FAO, the Rome-based UN food agencies, and the emirate provides relief for disasters around the globe. “We provide support wherever there is any earthquake anywhere,” says Sheikh Jaber, “we don’t discriminate according to whether people are Arabs or by religion or gender. We think about helping the society of the world, for the good of humanity, rather than about politics.”

“Kuwait is used to accepting modern ideas,” the Ambassador says. “Our merchant vessels ply goods to India and as far afield as Yemen, Muscat, Mombassa and Singapore. Our society has been welcoming people from other cultures for 200 years.”