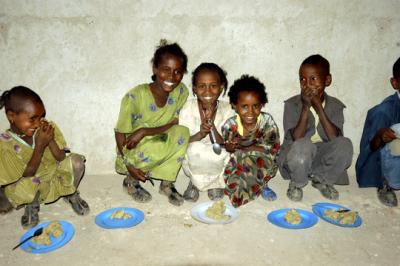 According to the report, the Ethiopian government conditions access to development aid on support for the ruling party, People's Revolutionary Democratic Front (EPRDF). The international organisation urged foreign donors to ensure their aid is used in an accountable and transparent manner and does not support political repression.

The 105-page document, 'Development without Freedom: How Aid Underwrites Repression in Ethiopia', found that development aid “flows through, and directly supports, a virtual one-party state with a deplorable human rights record.”

In addition, foreign aid-funded "capacity-building" programmes to improve skills that would aid the country's development are used by the government “to indoctrinate school children in party ideology, intimidate teachers, and purge the civil service of people with independent political views.”

A WFP spokesperson said that the Agency’s own findings “do not support the conclusions of reports regarding systematic abuse of aid in Ethiopia.” She also said that WFP “takes allegations of politicization of aid programmes very seriously.”

Ethiopia is today the second largest recipient of foreign development aid after Indonesia and excluding wartime Iraq and Afghanistan. It receives approximately 3 billion US dllrs in funds annually. The European Union, the United States, the United Kingdom, and Germany are the largest bilateral donors.

This year, WFP’s programme of work in Ethiopia aims to assist 6.5 million people with a variety of programmes, under a budget of 681million US dllrs, though so far donations amount to 363 million. Last year WFP spent just over 488 million US dllrs on programmes in Ethiopia.

According to the report, Ethiopia’s foreign donors are aware of the discrimination, “but have done little to address the problem or tackle their own role in underwriting government repression…some acknowledged and dismissed the problem; and some did not acknowledge it at all.”

“Development agencies have turned a blind eye to the Ethiopian government’s repression of civil and political rights, even though they recognise these rights to be central to sustainable socioeconomic development.”

According to the report, donors justify their continued support of the government by highlighting Ethiopia’s development progress. “In the short term, these donor programs are ostensibly helping the country make progress toward reaching Millennium Development Goals. In the longer term, however, they are fortifying an oppressive political apparatus responsible for serious human rights violations.”

In addition, donor operations undermine their own human rights policies. The UN Millennium Declaration for example, states that “men and women have the right to live their lives and raise their children in dignity, free from hunger and the fear of violence, oppression or injustice. Democratic and participatory governance based on the will of the people best assures these rights.”

The HRW report suggests that donors have become too concerned with the immediate desire to meet the Millennium Development Goals and as a result ignore their own human rights policies.

The report suggests that the Western World have strategic as well as humanitarian interests in assisting Ethiopia. The country represents “a key ally in the region for Western states seeking a bulwark against an intransigent Eritrea, an increasingly effective and radicalized insurgency in Somalia, and possible instability in neighbouring Sudan following its referendum in 2011.”

Rona Peligal, Africa director at Human Rights Watch, said: "In their eagerness to show progress in Ethiopia, aid officials are shutting their eyes to the repression lurking behind the official statistics. Donors who finance the Ethiopian state need to wake up to the fact that some of their aid is contributing to human rights abuses."

Previously, countries have suspended aid to Ethiopia due to the use of political repression. In 2005, donors suspended budget support due to “electoral violence” in which state security forces used excessive force against protestors, killing 200 and arresting over 30,000 people. In the same year, the World Bank said donor assistance could be “compromised if the Ethiopian government did not make progress on political governance.”

“Donors’ unwillingness to seriously weigh the impact that their funding has on bolstering repressive structures and practices raises general concerns about donor policy toward Ethiopia, and underlines the importance of ensuring that development assistance fulfils long-term goals for the benefit of the population rather than donors’ political or security considerations.”

The report concludes that donor strategy toward Ethiopia “needs fundamental rethinking. In light of the government’s human rights violations, direct budget support to the government should not even be considered, and programs supported by international funds should be independently monitored.”

A WFP spokeswoman said the agency “has a wide range of monitoring systems in place, including monitoring of the selection process used for beneficiaries, to ensure that beneficiaries are selected on the basis of need and we conduct careful oversight of food distributions. WFP is committed to the people of Ethiopia and we constantly work to improve safeguards to ensure that all of our assistance reaches those who need it most.”