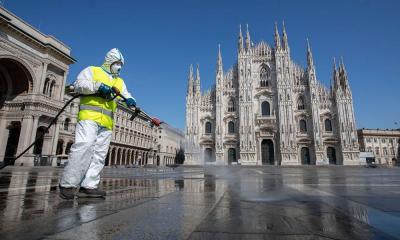 ROME - On Wednesday, 627 new deaths from Covid-19 were reported, the highest since January, a number which has led many to question why Italy still has such a high death toll compared to other European countries, and what the government is doing wrong.

Since March 1, Italy have had 43 deaths per million people a week, while Germany have only had 16 and France 30.

A Corriere Della Sera report has suggested many reason for this. In Italy, so far only 57 percent of the over 80s have received the first dose of the vaccine, while that number is about 72 percent in Germany. Only five EU countries have kept to the EU’s target of vaccinating 80 percent of over 80s by March 31: Malta, Ireland, Sweden, Finland, Portugal.

This is a major problem for the death toll as Italy’s Health Institute (ISS) reported recently that the average age of deaths from Covid is 81. Italy’s other major problem was that it is on average the oldest country in the EU, with 30 percent of the country over 60, compared to only 24 percent in the UK.

Corriere, also looked at the efficiency of the government actions, describing how, though Italy was one of the first countries to lockdown during the first wave last March, the government was too slow to react during the second wave, going into lockdowns when the death toll was already well above the point at which most other European countries locked down.

However, the R number throughout the country is currently decreasing, and once the regional R numbers are confirmed by the national health authorities, every region apart from Campania and Valle d’Aosta are set to become an orange zone. However, there is also suspicion that cases aren’t as low as the data may currently say, as the number of swabs administered over the Easter weekend greatly decreased, and it is very likely that there was a lot of family mixing for the festivities.

In light of the government’s decision on Wednesday to administer the first dose fo the AstraZeneca vaccine only to those aged 60-79 (the second dose will have no age limits), the government is now struggling to source the 34 million doses that had previously been allocated to the under 60s.

A study in Turin has also shown that one in four people would now say no to the AstraZeneca vaccine, given the recent troubling reports about links to thrombosis and blood clots. This will undoubtedly raise more problems for the country’s underperforming and under sourced vaccination campaign.