Pope urges 'fundamental rights for all' in prayer video 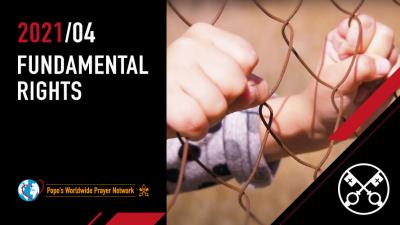 VATICAN CITY - In the April edition of Pope Francis' monthly Pope Video, the Holy Father focused on the fight for "fundamental human rights," and urged all Catholics to pray for those "actively combatting poverty, inequality, the lack of work, land and housing, and the denial of social and labor rights."

The Pope Video, produced by the Pope's Worldwide Prayer Network, is a monthly short video in which the pontiff sets out his prayer intention for the month, inviting all Christians to come together in prayer for a specific cause. April's video was made with the support of the Permanent Observer Mission of the Holy See to the United Nations and the AVSI Foundation, a non-profit organization which implements development and humanitarian aid projects in 33 countries.

The pope continued, "Often, in practice, fundamental human rights are not equal for all. There are first-, second-, and third-class people, and those who are disposable. No. They must be equal for all."

His plea for fundamental rights for all echoes many of the themes of his latest encyclical, Fratelli Tutti, in which he wrote, "While one part of humanity lives in opulence, another part sees its own dignity denied, scorned or trampled upon, and its fundamental rights discarded or violated."

He Pope Video ended with, "Let us pray for those who risk their lives while fighting for fundamental rights under dictatorships, authoritarian regimes and even in democracies in crisis, that they may see their sacrifice and their work bear abundant fruit."