Tourism Minister assures media that Italy is ready to relaunch 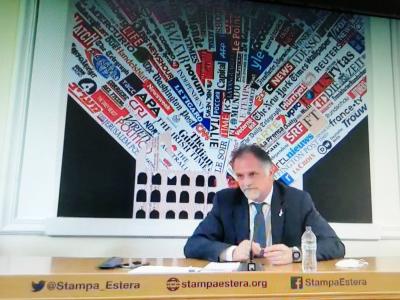 ROME - The tourism industry is a fundamental voice of the Italian economy and the sector most affected by the pandemic, worth, according to Minister Garavaglia, at least 15% of GDP and, in perspective, 20%.

The new League Minister of Tourism, Massimo Garavaglia, took stock of the prospects for the recovery of this important item of the Italian budget, in a meeting with correspondents of the foreign mass media in Italy, to which he answered numerous questions, also aware of the importance that information abroad on the tourist situation in Italy can have in reviving fundamental flows towards the Bel Paese. When asked about the way in which the Government is preparing for the restart of the sector and the relative planning, the minister stated that the programming "is fundamental" and "within a few days we will be able to give certain dates", however clearly affected by the pandemic. “Last year I remember that it opened in mid-May and I see no reason why the same thing won't happen this year”, he added, certain that the sector will be among “the first to restart”. Tourism also "will absorb labor that in the meantime is losing work in the short term from other sectors", and already this summer "we will have the opportunity to absorb workers who are in layoffs today". There is therefore no certain date, but in the meantime we can start planning a recovery in tourism.

The hope of Minister Garavaglia is to restart the sector, perhaps on June 2nd, celebration of the Republic Day. "We have been given ample reassurance in the Council of Ministers that it is the government's intention to arrive at a program for the summer", he reiterated, responding to those who asked him about the reopening of hotels and the departure of the summer season. As for the so-called Green Passport, developed by the European Union, Garavaglia recalled that it is not a vaccination passport, but a "pass, because it is not linked to the vaccine as such, that is only one of the conditions", specifying the others which are: “If you have been sick with Covid and have antibodies or the third condition, the simplest, if you have had a negative swab, you can still travel. This is why it is important that it be implemented at a European level to avoid that there are competitive advantages to the advantage of one State and to the detriment of another ”. In the meantime, according to the minister, it is back to being able to travel in peace and we will have the statistics next year.

For Garavaglia “the situation is dramatic for the operators but the potential is important. Immediate action is to assign the many resources available, over 500 million euro to the budget of the Ministry of Tourism, of which it has just been decided to assign a 2nd share of 228 million euro. There is also aid of 900 million euro for seasonal workers, including tourist guides and a correct regulation of these categories is foreseen, also in perspective, to enhance them in a structural way ". On signs of increases in bookings of foreign tourists for the summer, he replied in the affirmative: "positive signs are starting to arrive that could increase in the second part of the summer, with the increase in vaccinations".

Asked about the reactivation of Rome-Moscow air links, and about the 'vaccine tourism' implemented by countries such as Serbia, he recalled the experiments underway at Malpensa with nocovid flights to other destinations, but the developments in this field are also linked to the market and times are to be defined while vaccination tourism depends on the emergency but will become a residual phenomenon. The guideline, for the minister, is to combine security and economy and respect for data. On the restart of the sector with a shabby Alitalia, he stressed that this is an ancient theme despite which tourism has always worked well, so "we don't tear our clothes off".

As for the decalogue for the relaunch of the cities of art, recently promoted by some of the them, will be approved what will be considered valid for the entire country. For Garavaglia "Italy is now being promoted as a whole" not as individual areas.

Some countries have decided on the priority vaccination of tour operators and were asked if Italy has also planned something similar. For the minister there are protocols to operate safely and therefore the security bubble is guaranteed. A common Tourism-Transport and Health table was set up to coordinate and implement the initiatives in question.

On the reactivation of tourist flows of non-Schengen visitors, Garavaglia said he was certain that eventually bilateral agreements were extended. they will apply to everyone.

On the issues with which Italy intends to engage in countering foreign competition, he said that the reborn Ministry of Tourism, which coordinates and promotes the initiatives, is already an instrument that marks a decisive step forward. Asked what the government is doing to support more sustainable tourism, Garavaglia cited the blocking of the navigation of large ships in Venice, with the approval of 9 temporary landings outside the city, and other initiatives such as an acceleration of a 'digital revolution' that facilitates the movement of tourists, or the enhancement of the network of historic railways, or alternative tourism.