Death of Hans Küng, 'greatest threat to church since Luther' 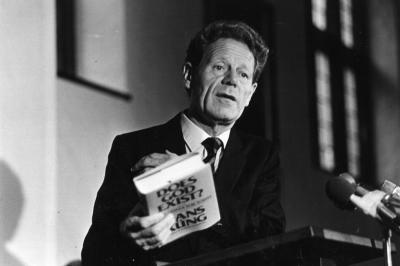 TUBINGEN - The Swiss theologian and priest Hans Küng, thought to be the greatest threat to the Catholic church since Martin Luther, has died in Germany aged 93.

Küng was an incredibly controversial figure within the church, best know for his rejection of the infallibility of the pope. He was censured by the Vatican on multiple occasions for his criticism of Catholic thought on birth control, priest's celibacy, the ordination of women, homosexuality, abortion, hell and many other things.

Küng, who dreamed of being a priest since he was 11, wrote over 50 books on topics including Thomas More, Freud, Mozart, Jewish views of Jesus, Eastern religions, life after death and the existence of God. Peter Hebblethwaite, a Vatican expert, wrote that “never again would a theologian have such influence.”

He was ordained in 1954 and said his first mass at St Peter's Basilica in Vatican City.

In the 1960s he was an official theologian at the Second Vatican Council, where he pushed for many reforms to Catholic dogma, and he was later offered a position at the Vatican by Pope Paul VI, despite being in disagreement with many of Küng's views. Küng turned down the position, for fear of being a conformist, though later wrote it would have been "the great opportunity of my life."

On a book tour of the US in 1963, the Catholic University of America in Washington, banned him from speaking, but his ideas and writing drews crowds of thousands elsewhere around the country.

“If he’d played his cards differently, Hans Küng could have been pope," wrote Time's correspondent at the Second Vatican Council, Robert Kaiser, in 2006. He was often described as being overly self-confident, allegedly joking that he didn't want to be pope as he wouldn't then be infallible.

His 1970 book 'Infallible? An Inquiry', in which he rejected the doctrine of papal infallibility, originally adopted in 1870, led him to lose his position as an official church theologian. Pope John Paul II approved this dismissal meaning Küng could no longer teach in an official capacity on behalf of the church, and couldn't hold any position in church government.

Küng had been friends with Pope Benedict XVI since 1965 when he recruited the then Cardinal Ratzinger to be a professor at the University of Tübingen. Though they severely disagreed over many things, when he became pope in 2005 Benedict invited him to dinner at Castel Gandolfo, agreeing not to argue. The pope praised Küng's attempts to unite religion and the natural sciences, and Küng praised the Pope's attempts to unite Christianity with other religions.