Draghi in Libya, a lot has yet to be achieved 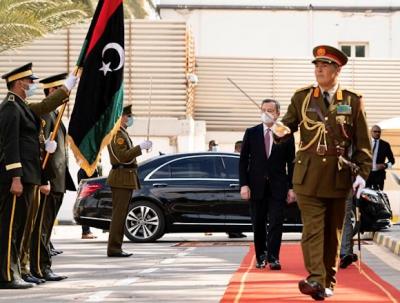 Draghi in Libya during his first foreign trip as Prime Minister

TRIPOLI - The half day spent by the Prime Minister Mario Draghi in Libya had many indicative moments and served to clarify objectives and obstacles.

In fact, in Tripoli, the Italian Prime Minister, accompanied by Foreign Minister Luigi Di Maio, met with the interim Prime Minister of the Libyan Transitional Government Abdul Hamid Dbeibah. On the agenda in the talks, political aspects such as that of the pacification of the country, and economic issues such as the guarantees for the presence of Italian companies in Libyan soil.

In essence, however, Draghi's visit to Libya is part of the broader framework of the United Nations attempt to stabilize the country and the declared objective of the conversation with Dbeibah, that is, the recovery of Rome's influence in its former colony, is more a hope that a fact given that, if it is true that the UN has mediated between the parties to find the name of Dbeibah as unitary premier, the conditions were essentially dictated by Turkey and Russia.

It should be remembered that if Italy has maintained some remnants of influence in Libya during the civil war, it is because the massive presence of key players in its "parallel diplomacy", above all ENI, have kept their feet firmly on the Libyan economy.

This is also why Draghi and Dbeibah spoke of important reconstruction works - one of the spearheads of Italian diplomacy, not only economic - including the reconstruction of the Tripoli airport, which for some years had been semi-destroyed and largely inactive, which should be entrusted to the consortium of Italian companies and financial support for the construction of the coastal highway that should cross the country from the Tunisian to the Egyptian border, a work carried out only minimally and which was part of the agreements between Berlusconi and Colonel Gaddafi.

During the visit, the experts accompanying Mario Draghi discussed various agreements for the energy sector while on the health front the two leaders ensured maximum collaboration between Italy and Libya just as on the management of migratory flows.

In the coming weeks, among other things, the Italian Parliament will have to express its opinion on the refinancing of cooperation programs, supply of means and training of Libyan personnel involved in the control of migrant routes, programs that so far have not shown either for effectiveness or transparency which, doubt arises, have rather contributed to fostering the warring parties than to guaranteeing the security of the Italian borders.

Although to be complete, in Tripoli they speak instead of a routine visit by Draghi, and so perhaps also considered by the Libyans, in fact the day before, the Maltese Prime Minister Robert Abela met Dbeibah and on the afternoon of April 6 his Greek colleague Kyriacos Mitsotakis arrived in Tripoli while in recent weeks many states, including France, have reopened their embassies in the Libyan capital.