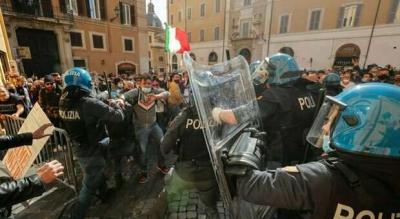 ROME - Police and protesters were injured after demonstrations against the Covid restrictions outside Palazzo Montecitorio, the seat of the Chamber of Deputies, turned violent, with hundreds trying to push against the police cordon.

The protesters were mainly restaurant owners, shop keepers and street vendors who have seen their business struggle and die during a year of lockdowns and restrictions.

First came shouts of “clowns!” and “freedom!”, before police forces began to use tear gas and protesters threw bottles and other objects, trying to break down the police barrier.

Italian Interior Minister Luciana Lamorgese said of the clashes, “we cannot accept that, in such a difficult time for the country, in which great cohesive effort and solidarity are required, the reasons to protest result in behaviour that provokes further tension and upset.”

Gianfranco Vissani, the chef and television presenter, said “if [the government] don’t act soon, revolution with break out. The government has underestimated the desperation in the industry.” He continued, “we don’t work at Christmas, we don’t work at Easter, and they give us mere pennies for being closed for a year now. But what can the people do? There are businesses, employees, customers, leases. When they let us reopen we will be full of debts.”

“But the thing that causes more anger,” Vissani continued, “is that while they force us closed, the vaccines are slowing down. How much do they think the people can resist before giving in to desperate gestures.”

One protester who caught the eye was Ermes, 51, a restauranteur from Modena, who came to the clashes dressed like the shaman from the assault on the US Capitol in January, though with the Italian flag on his face rather than the stars and stripes. “I’ve been open since January, because for a year nothing has changed, despite all the closures,” he said. “We are exasperated. No one has listened to us. I had to dress like a clown to attract attention. I hope that now someone will notice us and listen to us. I had to go to loan sharks in order to pay my employees.” 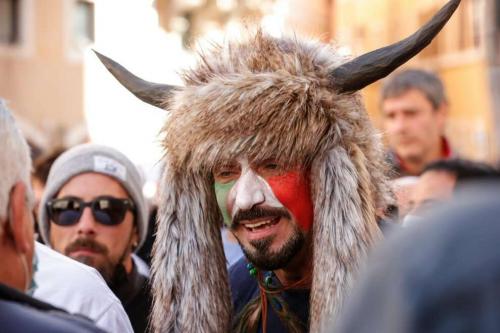