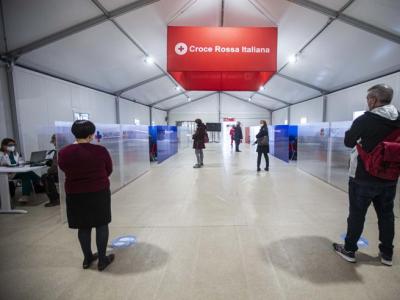 ROME - Italy's already struggling vaccination campaign has produced yet more disappointing results after it was reported that over the Easter weekend, an average of less than 150,000 doses were delivered a day, despite the government's previous hopes to be administering 600,000 doses throughout April. Only 211,000 were administered on Saturday, 92,000 on Sunday, and 124,000 on Monday.

The government are hoping that the 1.5 million doses of the Pfizer vaccine set to arrive on Wednesday will get the vaccination campaign back on its feet, still far behind their targets.

Government health officials are on Tuesday have a meeting to discuss the possibility of making the AstraZeneca vaccine solely for the use of over 60s, as Germany has done, following studies that the widely reported cases of thrombosis that have been linked to the vaccine, though the European Medicines Agency (EMA) denies any causal link, are much more likely in people under the age of 60. However, Italian Medicines Agency (AIFA) expert, Pier Mannuccio, has said that denying the AstraZeneca vaccine to under 60s is "highly questionable", and we should wait for more infromation from the EMA.

Matteo Bassetti, the director of Infectious Diseases at the San Martino Hospital in Genoa, said, "Johnson&Johnson [who will reportedly only deliver 500,000 doses in April, despite promises of more] will be the perfect vaccine for younger people, in the 30-65 age range." He also added, in regards to anti-vax protesters, "those who carry out intimidating and violent acts must be considered terrorists."