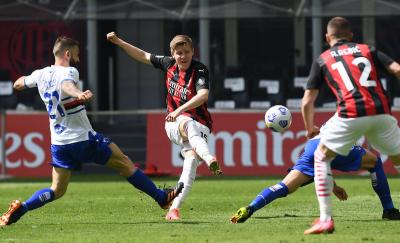 ROME - After the latest round of Aserie A fixtures over the Easter weekend, the first for two weeks due to the international break, Atalanta's victory over Udinese saw them take third spot from Juventus, and Lazio have overtaken Roma into sixth after their win against Spezia.

Inter have stretched their lead over AC Milan at the top of the table to eight points after beating Bologna 1-0 away. It was a close game, with both teams having 12 shots at goal, but Bologna couldn't quite capitalise on any of their chances. The decisive goal came in the 32nd minute from a precise cross from Alessandro Bastoni onto the head of Romelu Lukaku, whose initial effort was superbly saved but the ball fell to the Belgian's feet for an easy tap in. It is Lukaku's 20th goal of the season, and he became only the seventh player in Inter's history to score 20 goals two seasons in a row.

AC Milan, sitting in second place, are gradually seeing their title chances slip away after drawing 1-1 at home to Sampdoria. After a first half in which Milan didn't have a single shot on target, Sampdoria opened the scoring in the 57th minute after a poor pass by Milan left back Theo Hernandez was intercepted by Fabio Quagliarella and hit first time into the back of the net, lobbing the helpless Milan keeper. Just two minutes later Sampdoria's Adrien Silva was sent off for a second yellow after a late tackle on Samu Castillejo, leaving Sampdoria having to protect their small lead with just ten men. Piling on the pressure throughout the second half, Milan, finally managed an equaliser in the 87th minute through a neat finish by substitute Jens Hauge.

Juventus have slipped down to fourth after their 2-2 draw to 17th place Torino. An early goal from Federico Chiesa gave Juventus the lead, but Antonio Sanabria's two goals, in the 27th and 46th minutes, gave the Turin derby underdogs a surprising lead. However, Cristiano Ronaldo managed to salvage a point in the 79th minute with a header that was initally ruled offside but then overruled by VAR.

It was Atalanta that snatched Juve's third place after their 3-2 victory over Udinese. Atalanta's Colombian contingent was yet again crucial for the homeside with Luis Muriel scoring their two first half goals, with Duvan Zapata finishing off the Colombian hattrick with a goal in the 61st minute. Goals for Udinese from Roberto Pereyra and Jens Stryger Larsen weren't enough for the 12th place team - despite having the majority of possession they were never enough of an attacking threat.

The battle for sixth place, and the opportunity to play in next season's Europa league, is meanwhile being hotly contested by the Rome teams. Roma slipped down to seventh after drawing 2-2 to Sassuolo, leaving sixth place for Lazio after their 2-1 victory over Spezia, but still only one point separates the two teams in the table.