Draghi in Libya to promote Italian interests in former colony 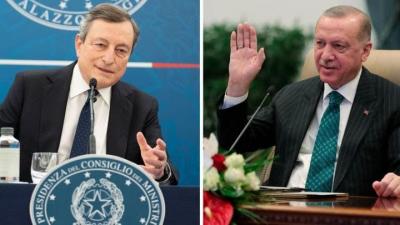 ROME - After the recent mission of the three foreign ministers of Italy, France and Germany to Tripoli and the reaffirmed unity of the EU on the Libyan dossier, Europe now appears to be side by side with the new government of national unity led by Abdel Hamid Dbeibah and in favor of the United Nations road map, after months of ambiguity of some countries, which fully supported General Khalifa Haftar.

Italy, for example, after having inaugurated the diplomatic ballet in Tripoli, with the double visit of Luigi Di Maio, has been preparing the visit of the Prime Minister, Mario Draghi, who was travelling to Libya Tuesday.

For many experts, Italy is preparing with this mission led at the highest level, to defend with strength and conviction in Libya, its international interests and its role in the pacification of the North African country.

Italian diplomacy will therefore support the "government of national unity" with a clear objective of organising elections and helping the new leadership to cope with the economic emergency, aggravated by the Covid-19 pandemic and to imagine solutions to a greatly worsened social situation.

Mario Draghi wanted to launch a clear message aimed at insisting that every effort should be made to "preserve the agreement on the ceasefire and obtain the evacuation of those who fueled this war, the mercenaries and troops of other countries, including Turkey."

An attack on a country that has woven a dense network of relationships over the years and enjoys a decisive influence on the various protagonists of the Libyan political scene.

And according to many commentators, it is unlikely that this intention will have concrete effects, but the declaration of the Italian premier undoubtedly represents a turning point in the Italian position, which is getting closer and closer to an axis with Paris on this dossier and on other issues.

And to those who ask him if there are two approaches to the Libyan question, his and Luigi Di Maio's, the Prime Minister is categorical: "The government's foreign policy line is one and only one, that is to support the government of national unity in Libya with the aim of elections in early December, with respect for the ceasefire and the withdrawal of foreign forces that have played a destructive role in the country.