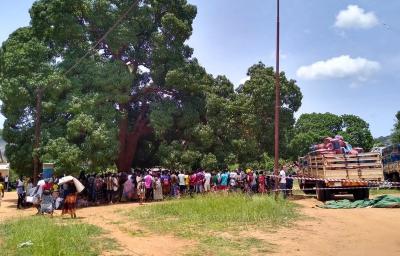 PEMBA – After brutal attacks that have left thousands of people fleeing their homes in Palma and in need of urgent humanitarian assistance, the United Nations World Food Programme (WFP) is working around the clock to assist people in need following the latest outbreak of violence in Palma town, Cabo Delgado Province, northern Mozambique.

WFP has ramped up assistance and aims to reach up to 50,000 people affected by the attacks.

The agency is providing emergency food assistance including High Energy Biscuits and Immediate Response Rations (IRR) consisting of rice, pulses, vegetable oil, canned foods such as sardines and beans, biscuits and water for people being evacuated both by air and sea as well as for those fleeing on foot, and some 2,000 of these ration kits are currently being deployed to support displaced people should they arrive in Pemba, Ibo Island and neighbouring districts such as Mueda and Nangade.

The United Nations Humanitarian Air Service (UNHAS) managed by the World Food Programme is providing an air bridge to transport critical medical staff, humanitarian workers as close as possible to the operational sites, as well as provide medical evacuation of people in need. They are also supporting the evacuation of civilians, including women and children and those critically injured. Since the onset of the crisis on 24 March, a total of 18 UNHAS rotations were made, evacuating 335 people.

WFP is committed to ensuring emergency assistance reaches those who need it most and plans to continue food assistance in Palma as soon as it is safe for all humanitarian staff and partners to do so: WFP and UNICEF are on stand-by with an extra 2,000 food kits and water, sanitation and hygiene emergency kits to assist affected people in Palma.

Prior to the attacks, WFP and partners had delivered 258 MT of food and nutrition assistance to meet the needs of nearly 16,000 people for a month in Palma.