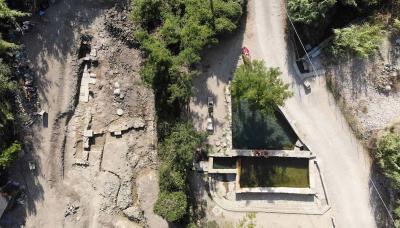 SIENA - The incredible discoveries in 2020 of the remains of a Roman sanctuary at San Casciano Dei Bagni are being published in an authorative work on the excavations of the site. The publication is edited by Emanuele Mariotti and Jacopo Tabolli, with contributions from more than thirty archaeological experts.

Last August, at the excavaations of Great Baths of San Casciano dei Bagni, it was discovered in the warm mud the remains of a monumental entrance to Roman sanctuary, with an altar of travertine on the threshold, with the inscription 'sacro ad Apollo'.

But the surprises didn't end there, with the discovery in September and October of an abandoned gardens just a few metres from the public springs, still in use today. It forms part of the remains of intact Roman sanctuary with altars dedicated to Fortuna Primigenia, Iside and Apollo and a marble statue depicting Igea.

These amazing discoveries were made by a group of international archaeological students from Siena, Pisa, Florence, Rome La Sapienza, Sassari, Dublin and Cyprus.

In only two months the excavations have revealed with clarity a place of cultural importance dating back to the time of Augustus, as well as being an important sacred site for the Etruscans, on account of the hot springs that rise to the surface at about 42 degrees celsius.