Tough Easter restrictions to be enforced by 70,000 police 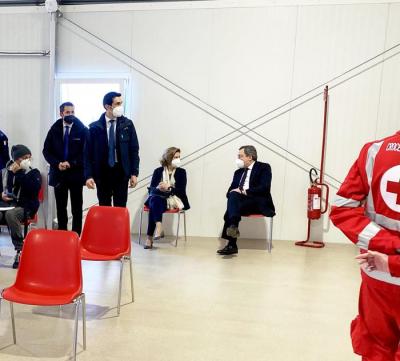 Mario Draghi with his wife at the Termini vaccination centre

ROME - With the Easter weekend in Italy set to be a full lockdown, the government have announced the use of 70,000 law enforcement officers to enforce the restrictions throughout the country. The latest Prime Ministerial decree rules that the national lockdown over the weekend will involve a bunch of new restrictions, including no open air picnics in public spaces and only two guest allowed into a private residence.

As the Italian vaccine campaign is gradually picking up speed, with 10 million doses expected to have been administered by Wednesday, the arrival of the Johnson&Johnson vaccine on April 19 set to bring a huge boost to the campaign.

However, it has been reported by La Repubblica that still only 10% of the 6 million Italian aged from 70-79 have received the vaccine, despite this age group currently being the most infected, being much more likely to suffer severe symptoms and taking up the majority of intensive care beds.

More people in their 20s than 70s have received the vaccine, being medical students or testing and vaccination volunteers.

Prime Minister Mario Draghi and his wife received their first dose at the vaccination centre at Rome’s Termini station on Tuesday morning.

The government have announced the allocation of 400 million euros to the ten Italian pharmaceutical companies currently working to produce their own vaccine in Italy. It is expected that there should be one ready within three or four months.