Renzi at centre of polemics after trip to Bahrain 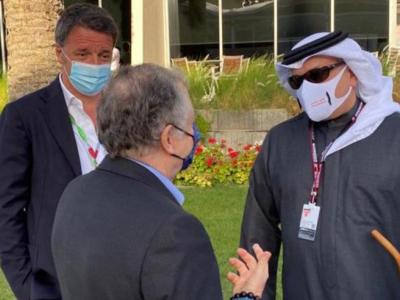 SAKHIR - Italia Viva leader Matteo Renzi has caused yet more controversy after being spotted at the Bahrain Grand Prix on Sunday, while Italy is still in lockdown.

Renzi came under fire at the end of January for his trip to Saudi Arabia for a conference, part of a series for which he was to be paid 80 million euros, organised by Saudi Crown Prince Mohammed bin Salman - a trip which also caused additional criticism for Renzi’s friendship with bin Salman despite his poor human rights record and involvement in the murder of journalist Jamal Khashoggi.

Renzi, the former Prime Minister, was spotted on Sky’s coverage of the Formula 1 event, as well as appearing in a photo alongside Jean Todt, President of the International Automobile Federation (FIA), posted to Todt’s twitter.

He has been much criticised for his extensive travel during the pandemic, and allegedly not quarantining on arrival. However, an official press release from his office has said, “as always he respected all the rules,” and on Tuesday “will be in the Chamber to discuss the Family Act.”

His friendship with the Saudi royal family, in particular Mohammed bin Salman, the son of the King and de facto ruler, has caused much controversy, with Renzi even saying that the prince “is someone I’ve known for years, and is a friend. For my part, I fully condemn [the killing of Khashoggi] but there are no certainties on the fact that [bin Salman] instigated the murder.”

Renzi has repeatedly praised Saudi Arabia, and the Middle East as a whole, as a new economic centre for development and culture.