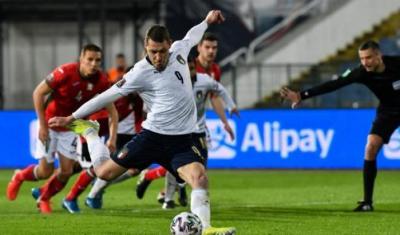 SOFIA - Italy’s qualification campaign for the 2022 World Cup continued its perfect start after they beat Bulgaria 2-0 away on Sunday night. It is their second win of the campaign so far after beating Northern Ireland 2-0 on Thursday.

Italy, who failed to qualify for the 2018 World Cup, were by far the dominant team with 67 percent of the possession and 22 shots compared to Bulgaria’s two. However they were at times slow and uninspired and this match against the 68th best team in the world is no doubt not the best test of their ability to perform on a bigger stage.

Italy opened the scoring in the 43rd minute with a penalty well converted by Andrea Belotti after he was tripped by Daniel Dimov in the box.

The highlight of the match perhaps came in the 82nd minute with Manuel Locatelli’s neatly curled finish into the side netting from just inside the penalty area, from a nicely worked assist by Lorenzo Insigne.

Italy’s quest for qualification, to make up for the wrongs of four years ago, continues against Lithuania on Wednesday, who are currently ranked 129th in the world.

To guarantee a place in the World Cup, Italy will need to finish top of their group, of Switzerland, Lithuania, Northern Ireland and Bulgaria, though finishing second also gives them a chance, having to play a play-off match against another second place team.