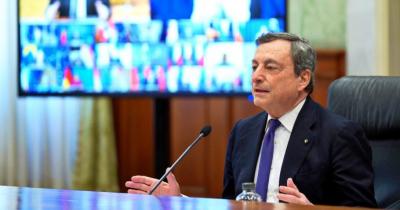 ROME - After a video conference with European leaders to discuss the EU's vaccine troubles, Mario Draghi on Friday met with Italian government officials to discuss expected changes to Covid restrictions. Changes to the colours of regions from Monday or Tuesdat were expected announced on Friday afternoon with the midday government meeting set to also decide on new regulations within the colours.

Based on latest coronavirus data, in particular the R number, Lazio is to change to orange from Tuesday with Valle d’Aosta changing to red. Commentators also expect changes to the restrictions, including hairdressers possibly opening in red zones, as well as a loosening of restrictions on bars and restaurants.

The right-wing Forza Italian and League are keen on these weaker restrictions, while there are plenty of hardliners arguing for the lockdown to continue all through April as well. Whatever restrictions Friday’s announcements bring, the Easter weekend will be a full lockdown throughout the country.

While discussions are being had about the potential opening up of some areas, Bari and other areas of Puglia are suffering from their worst wave yet. On Thursday Bari saw the highest number of Covid hospitalisations of anywhere in Italy, and there are currently patients in intensive care, taking up 41 percent of all hospital beds dedicated to those in critical conditions. The director general of Bari University Hospital, Giovanni Migliore, has warned a “shockwave” still to come for intensive therapy units that is still to come, usually arriving 10 days after the peak of infections.

During the first wave, Bari were proud of their lack of infections, even taking patients from Lombardy into their relatively empty intensive care units, but now it is their hospitals and emergency services that are suffering under the strain.

In a videoconference with European leaders on Thursday, Mario Draghi said that “European citizens feel like they have been deceived by the pharmaceutical companies,” and that he gives his “full support” to the mechanism to control the export of European vaccines. Speaking about the discovery of the 29 million doses ‘hidden’ in an Italian factory, he said Europe cannot just stand by and watch “in the face of contractual violations that put the European vaccination campaign at serious risk.”

At the European Council’s video conference, US President Joe Biden also made an appearance, talking about his “commitment to the relationship between the United States and the EU,” adding that “a strong EU is in the interests of the US.” He called for close cooperation in the fight against Covid and climate change, and a reinforcement of the economic links, as well as his wish to cooperate on issues of foreign policy, including China and Russia.