The German attack on Dante that caused fury on Dantedì 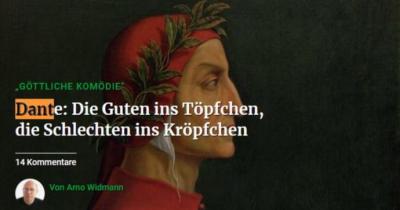 ROME - With Italy’s Dantedì celebrations in full flow, an article from a German newspaper seemingly criticising the great poet has caused much polemics, with many furious Italians leaping to defend him.

The debate was brought to the attention of the nation when Repubblica published an article online, with the headline on their Facebook page, “Dante, the incredible attack of a German newspaper: ‘Upstart and plagiarist, Italy has little to celebrate.’”

The story was followed by hundreds of comments attacking the German journalist behind the story, Arno Widmann, as well as some more colourful criticisms of Germany as a whole. Il Fatto Quotidiano’s coverage of the article added, “What do they have to teach us, from the country of Goethe?”

However, one Facebook user stepped in to add some clarity to the debate, “I read the whole article. I’m appalled. Where is this “incredible attack on Dante?” It is a boring article that starts with provincial poetry, goes on to talk about the Divine Comedy and arrives at Shakespeare. No big deal. “Plagiarist?” It cites an article from 1919 from the Arabist Miguel Asia Palacio according to which Dante knew the story of Mohammad ascent to heaven and was inspired. Upstart? It talks about a competitive spirit inviting us to “not undervalue” Dante, certainly not to attack him.”

Another user added, “it is a learned and wide ranging analysis, that proposes interpretations and points of reflection. I couldn’t find any trace of “Italy has nothing to celebrate.”

Tobias Piller, Frankfurter Allgemeine Zeitung’s Italian correspondent, said, “I read nowhere either upstart or plagiarist. It seems to me an article that frames Dante in his time, and explains his greatness to Germans.”

Though the article does ask some interesting questions about Dante, it doesn’t seem to be as critical as it has been made out to be. In a year in which Italy is celebrating Dante, the article has perhaps brought attention to itself by not being the purely complimentary article which has been more common recently.

The comparison with Shakespeare, which can be “almost blasphemous” according to Il Fatto, is nothing for Italians to lose sleep over, with Widmann describing the English poet as “amoral.”