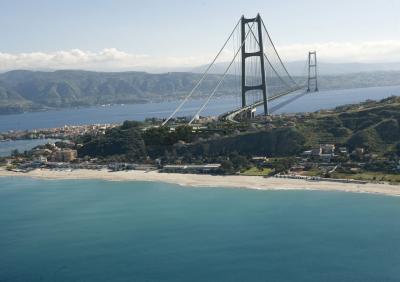 NAPLES - Never again an end like that of the Genoa Bridge. Italian civil engineering must react and demonstrate its efficiency.

Starting with the Bourbons, the idea of building a bridge between Calabria and Sicily was a much desired idea, pursued for years without ever coming into fruition. In the meantime, projects have been planned and designed, trying to grasp the most suitable ideas so that the bridge can be realised: dedicated commitment, cost estimates, technical reports produced, environmental impact assessment, public contracts, contracts assigned and then… penalties to pay and more, the politics that come and go, and meanwhile, the bridge over the Strait of Messina, unfortunately still seems a chimera.

Yet it should be well understood what it would mean to give life to such a colossal structure that would connect two regions -- Calabria and Sicily. And not only this! The construction of the bridge would bring about a series of changes that would not only affect the landscape, which would also be surprising, but the biggest and most decisive impact would be on the economic, commercial and social level and, I dare say, not only in regards to the two regions involved, but for the whole of Italy.

It seems that the construction of this bridge is therefore at the centre of the discussion around the new national Recovery and Resilience Plan. Since one of the objectives of the Recovery Plan is the strengthening of production in a structural and sustainable way, the Bridge would rightly be one of the essential means for the recovery and development of our country.

In fact, I believe that once all the initial deadlocks of the construction have been overcome, the bridge would guarantee a series of positive changes. First of all, it would not weigh entirely on the costs of the state since many private bodies would be involved in the work; its very construction would guarantee new tax revenues from the related activities that would automatically be created around it; in essence, it would also produce more employment.

We would be faced with an engineering work never seen before, colossal, record-breaking! It would be a real Italian pride; it could become a banner of Italian engineering.

We should leave behind all the aversions towards the construction of the Bridge based above all on prejudices and reflect, by analysing the salient points, why it is really worth building such a bridge.

I believe bridging distances is always a positive thing and the bridge would truly be an opening not only to the countries of the North, but would allow us to take advantage of the central position in the Mediterranean between Suez and Gibraltar, ensuring that the entire country can be redeveloped and "repositioned" as a true platform for oceanic economic momentum.

An intercontinental economy would develop. It would bridge the infrastructural gap between the North and the South which still too often does not allow us to invest all our resources and energy towards a single goal: to feel Italy ever more united with Europe.