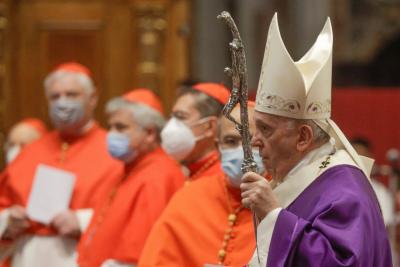 VATICAN CITY - In an Apostolic Letter, Pope Francis has announced that all Cardinals in the Holy See will we receiving a ten percent pay cut from April to cope with the Vatican’s financial losses over the last year.

The letter released Wednesday by the pontiff was in the form of a ‘motu proprio’, issued and signed by Francis ‘of his own accord’.

It outlined the reasons that the Holy See needs to restrict its spending, including the “deficit that has for many years characterised the economic management of the Holy See,” now aggravated by the Covid-19 pandemic, which has negatively affected all the Holy See’s sources of income especially tourism to the Vatican museums. The salaries of the cardinals was outlined as one of the Vatican’s biggest expenditures, and this move avoids having to lay off any cardinals.

All clerics of the Vatican and all members of the Institutes of Consecrated Life and Societies of Apostolic Life will also receive a three percent pay cut.

The letter also announced the pope’s appointment of the Reverend Sister Alessandra Smerilli as the undersecretary for the faith and development sector of the Dicastery for Promoting Integral Human Development.