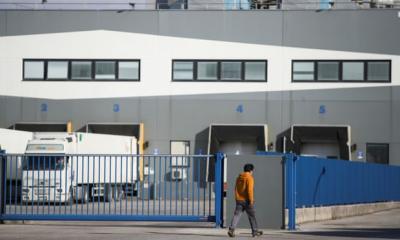 The Catalent factory in Anagni

ROME -  Over 29 million doses of the AstraZeneca vaccine “ready to leave for the United Kingdom” have been discovered in the Catalent factory in Anagni, near Rome. The discovery of this stock by Italian authorities, as reported in La Stampa, comes just as the European Commission are cracking down on the export of vaccines to outside the EU.

A report issued by the European Commission provoked an investigation and the Italian Ministry of Defence issued a mandate for the search, that took place over the weekend. The revelation by La Stampa has caused yet more friction between the EU and the pharmaceutical company, adding to issues already caused by the delays to the delivery of doses throughout Europe.

The batches which Brussels asked Italy to check were allegedly headed for Belgium. Valdis Dombrovskis, the executive vice-president of the European Commission, has said, “it is up to the company to declare their intentions.”

An official statement from the company has said that “at the moment no exports are expected other than to COVAX [Covid-19 Vaccines Global Access] countries. There are 13 million doses waited to be released from quality control to be sent to COVAX, as part of our commitment to provide millions of doses to low income countries: the vaccine was produces outside the EU and brought to the factory in Anagni to be put into vials.”

The other 16 million doses are all alleged to be destined for European countries, with 10 million planned to be delivered "by the end of March.”

Suspicions of AstraZeneca’s production have arisen before, with a plant in Seneffe, Belgium, being investigated in January after it was suspected, without evidence, that the company were lying about a low yield and instead shipping doses in large quantities to the UK.

La Stampa reported on Wednesday that in early March, Thierry Breton, the European Commissioner for Internal Market, visited a ‘Halix’ factory in Leiden, in the Netherlands, where the AstraZeneca vaccine is produced, while it is put into vials in Anagni.

According to La Stampa, the Dutch factory hasn’t yet been approved by the European Medicines Agency (EMA) to deliver doses to EU countries, and so it is likely that in an early stage they were delivered to the UK.

At the end of January, however, the EU put in place mechanisms to control the export of the vaccine to outside the EU. What this meant was that as production didn’t stop at the factory, capable of producing five to six million doses a month, there were now millions of doses sitting in fridges at the site with nowhere to go.

It is alleged that these doses were originally planned to go to non-EU countries, including both the UK and COVAX countries, though AstraZeneca dismissed these claims as “inaccurate.”

La Stampa reported that the Leiden factory has not yet been authorised by the EMA as the EU suspects that the necessary data and documents have not yet been provided by AstraZeneca as a way of guaranteeing faster and bigger deliveries of doses to the UK.

The 29 million doses allegedly waiting delivery in Anagni is double the number of doses AstraZeneca has so far delivered to the whole of the EU.

Dombrovskis has said that the EU has so far exported 10.9 million doses to the UK, while none have come in the opposite direction. Ursula Von Der Leyen added that “the roads must run both ways.”