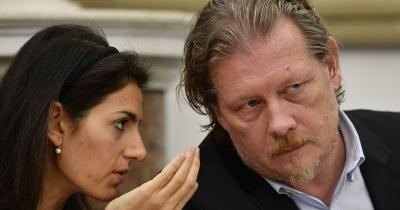 Lemmetti, the man at the centre of nepotism claims, with Rome Mayor Virginia Raggi

ROME - Just a day after the resignation of Silvia Di Manno from her new position in the Council of Rome - after accusations of nepotism, her boyfriend being Alderman for Budget Gianni Lemmetti - more alleged nepotism has been revealed after Lemmetti's old friend Cristiano Battaglini was appointed Chief of Staff in the Assembly of Rome.

Silvia Di Manno was elected to the office of the Alderman for Culture, Luca Montuori, on March 15, and stepped down on Sunday. The Mayor of Rome, Viriginia Raggi, didn't take part in the vote for her appointment, and allegedly didn't know about her relationship with Lemmetti until it was revealed by the Vicepresident of the Assembly of Rome, Francesco Figliomeni.

It was Figliomeni, the Fratelli d'Italia councillor, who on Monday also revealed Lemmetti's link to Battaglini, whose salary has more than doubled in the last four years.

Battaglini was a businessman in the tourism industry before taking a three year course at an online university to become an engineer. He was hired in 2017 to the council as an "expert in marketing", initially earning 41,000 euros a year. This amount has gradually increased over the last few years, much faster than is usual for someone of his position in the council, and his recent appointment to Chief of Staff came with a raise to 90,000 euros a year.

It is uncertain if Battaglini can officially call himself an 'engineer' in a professional sense, as Figliomeni, as part of his investigation, published a document from the National Council of Engineers that stipulates that one cannot give themself the professional title of 'engineer', unless they are on their register of engineers, something that it is not yet certified (and much doubted) that Battaglini is.

Figliomeni's revelations imply that Battaglini isn't qualified for the position, and that his appointment only came around due to his friendship with Lemmetti.