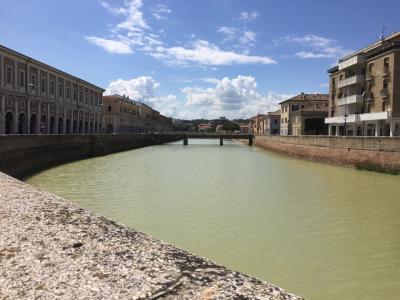 The Grand Canal of Senigallia

SENIGALLIA- This stunning Adriatic resort town is a lesser-known holiday destination in the central east part of Italy. Except for having historical connections with France and being founded by the Senones in the 4th Century, it has no links with the similarly named West African nation of Senegal!

In order to get to Senigallia it is best to book a flight directly to Ancona or fly to Rome and take a two and a half hour train ride through the rolling green hills and Italian countryside.

In return for your travel efforts you will be rewarded with an experience of an authentic Italian city.  Senigallia has mostly Italian tourists and local inhabitants frequenting its picturesque town squares, alleyways and outdoor markets.

Like many Italian towns, Senigallia is no stranger to being shaken up. Previous earthquakes have damaged parts of the town but it has retained its history and original look. The most recent earthquake was in 1997 between Umbria and Marche. Colfiorito was the epicentre but fortunately no buildings in Senigallia were destroyed at that time.

The most beautiful church in the town, the Chiesa Della Croce, built in 1608 remains intact. Its ceiling is adorned with unusual remains and features of coffins on the ceiling. Next door to the church is the family home of Pope Piu IX, the Pope who conceived the Immaculate Conception.

Next to his former home is the wide and beautiful square, recently renovated, called Piazza Garibaldi, named after the famous unifier of Italy, Giuseppe Garibaldi. The main church is next to the square, called the cathedral of Senigallia, built in 1877, and also worth visiting.

But let's not beat around the bush, while you are touring the canals, and town squares, soaking in the charming atmosphere, most of all you are probably counting the time left until dinner.

Senigallia is home to some of the best wines, gelato and food in Italy. This is the real reason, despite its beautiful beaches and wonderful history, that we really want to go, right?

I had the good fortune of being shown around by Eleonora Tramonti, a local travel enthusiast with her own travel blog, Italian Storytellers. She sells personalised tours in Italy so that foreigners can experience living like a local. She likes to show not only the big cities, but also the smaller ones where traditions and old habits are prominent in everyday life. She offers to show me some of the gastronomic delights of the region.

Eleonora takes me to the Mezzanotte Vineyard. The owners have a family business which in true Italian style has grandma, grandpa, uncles, aunts and children all doing their part to give this place a welcoming family feeling.

It's a young vineyard and has been producing wine for just 20 years despite enjoying 35 years as a farm. The vineyard is made all the more special as you can buy local farmers’ produce whilst also indulging in some wine tasting. I insist that you gorge on the local cheeses and take some home!

During the wine tasting I decide that Midnight passion or "passione di mezzanotte", in its original Italian, is my favourite, a red wine with a spicy taste. On complimenting the owner for her wine, I then receive an invite to a party I definitely don't want to miss.

This Vineyard hosts a "drink all the wine you want" party once a year with dinner for just 25 euros. This annual party has become so popular that over 400 visitors came last year, many found asleep among the vines the next morning.

For those travelling with a higher budget  (who don't have to sleep in a vineyard ) Duchi della Rovere is a wonderful hotel right in the town itself but in a quiet corner, with a great rooftop swimming pool and lounge area, modern decor, comfortable beds and friendly staff.

Aside from drinking copious amounts of wine, Senigallia’s beach offers kite surfing and roller-blading and is only a few minutes walk from the Duchi della Rovere hotel. The town has long cycle paths that run parallel to the beach for miles.

Once you have earned some calorie spend, you must visit Brunelli, the gelateria of Senigallia on Via Carducci near the canal. Paolo Brunelli, the owner of the shop comes from the kitchen to greet us personally. He travels around the world giving cooking classes and has already published a cookbook, with another one on the way.

When I try his ice cream, or rather gelato, I understand why artisanal, handmade gelato can't be called ice cream.

Paolo kindly lets us enjoy four tastings, the first experience is with 'Contemporary Ice Cream', the Portonovo taste with Campari bitter jelly; The second one is with 'Affogato al Marsala', the almond flavor of Val di Noto accompanied by a biscuit with orange; The third is a 'Chocolate ice cream assortment' while the latter is with the 'Sweet Sandwich'.

Paolo uses only the best ingredients and over the years has tried to reduce the calories.

"The gelato is not fat or heavy like industrial ice cream, because it is made by hand with the best ingredients," Brunelli explains.

We eat chocolate from Argentina, grated cheese and all sorts of exciting mixes that make the taste buds go wild.

To finish our trip we visit the vineyard of Piergiovanni Giusti, called Cantina, which is close to the medieval village of Morro d’Alba. This vineyard is famous for its indigenous varieties of Lacrima, Di Morro d’Alba and Verdicchio dei Castelli di Jesi.

So famous in fact that Barack Obama and Vladimir Putin once drank sparking pink Bolla Rosa together, one of the vineyards signature bottles, at a restaurant in Manhattan, New York.

Bringing together ancient Italian varieties with the most up-to-date winemaking technology, the Giusti family are producing some amazing wines.

Piergiovanni tells us that a few years ago there were not many vineyards due to a fatal virus but in the last 25 years he has started to select new vines without the virus.

Piergiovanni plants a rose bush at the front of every row of vines to warn him ahead if a virus is coming. He shows us his beautiful grounds and we can even taste a hint of rose in some of his wine.

We were told that a few years ago there were not many vineyards of Lacrima Di Morro D’Alba. Having inherited his vineyard from his grandfather Luigi Giusti, Piergiovanni is proud of his heritage in wine making. and hope to see his children run the business one day. If you are lucky enough to make it, ask Piergiovanni for a sneak peak at his impressive cellar, and bring extra money in order to stock up on wine to take away! 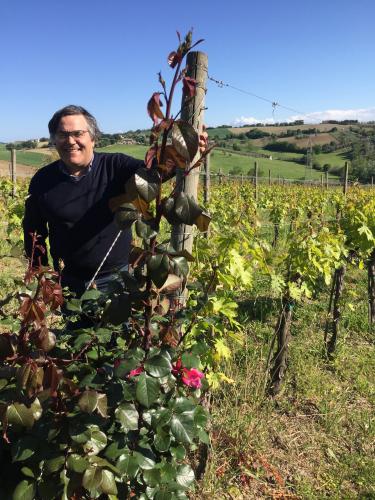 Piergiovanni tending to his rosebush 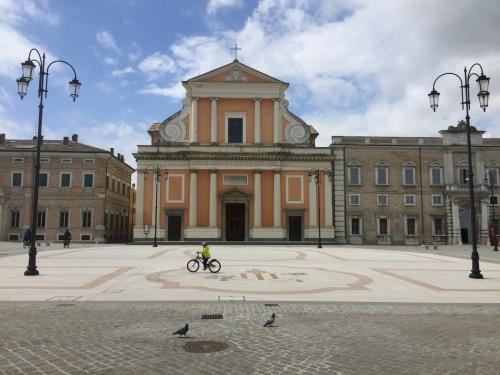